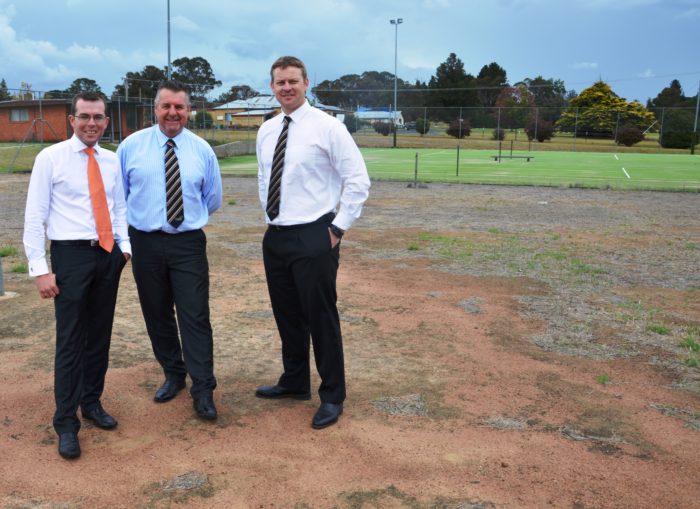 URALLA Shire Council’s plans to revitalise some disused tennis courts at the Uralla Sportsground received a huge boost this week with news from Northern Tablelands MP Adam Marshall that council will be the recipient of a $25,000 NSW Sport and Recreation grant.

Mr Marshall visited the sportsground this week with Mayor Michael Pearce and General Manager Damien Connor to inspect the old courts and discuss the proposed works.

He said council’s overall plan was to create a well-developed and well-resourced sporting complex that could cater for the needs of the majority of the sporting groups in Uralla and he was delighted with the State Government support.

“This $25,000 grant will go towards the construction of two multi-purpose courts which can be used for basketball, netball and volleyball. The nets and posts will be interchangeable, which is the perfect solution for a small but versatile complex,” Mr Marshall said.

“The courts will be laid on the foundations of old tennis courts which already have a good base and the surrounding fences.

“The $28,700 Community Building Partnership grant council received last year will go towards the construction of a new canteen which will be put to good use. The grounds are well-used and are particularly busy during the winter months with both the soccer and rugby league comps.

“It’s also a great way to give those clubs a new and very welcome stream of income.

“Next on council’s ‘to do’ list is new change rooms, new toilet facilities with disabled access and committee rooms.”

Mr Connor said council was intent on creating a multi-purpose centre that was well resourced and could provide playing and training facilities for local teams.

“Rather than have half a dozen smaller grounds around town, it makes sense to have one sports complex that caters to all groups,” he said. “It cuts down on our maintenance costs and allows us to focus on developing one, very good facility.

“Ultimately you can attract more people to participate in a sport if you have good facilities, and our overall plan for Uralla is keep adults and children active, engaged and interested in playing sport.”