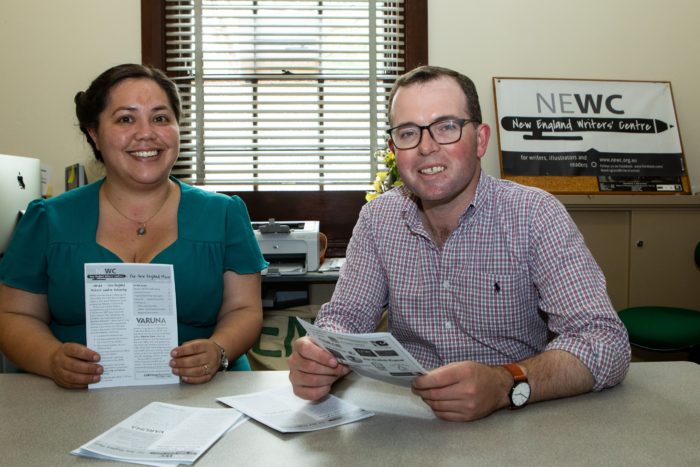 CREATIVE writers in the New England will learn the tricks of the trade over a year-long intensive program of workshops on writing, pitching stories and illustration, supported by a $22,000 grant from the State Government, announced today by Northern Tablelands MP Adam Marshall.

Mr Marshall said everybody had a story to tell and it’s the New England Writers’ Centre’s goal to deliver those stories to the world.

“We are so lucky to have an enterprise like the Writers’ Centre here in our own back yard, dedicated to sharpening the story telling skills of amateur and experienced authors alike,” Mr Marshall said.

“This $22,000 grant will support the New England Writers’ Centre to deliver an exciting and original program in 2020 aimed at inspiring a new generation of writers and illustrators.

“This year we saw the organisation take a leading role in the promotion of the Armidale’s Ezidi community through its Stories Connect initiative.

“Over 12 months the Centre worked with newly-resettled Ezidi refugee families and Armidale locals to create stories, pictures and music which encourage greater cultural understanding between the two groups.

“Projects like these are proving to be important in developing social cohesion and creativity in Armidale and I’m pleased the State Government is once again supporting the great work of the Writers’ Centre.”

“Armidale is full of exciting and captivating stories just waiting to be put out there for the world to enjoy,” Ms Alvarez said.

“This funding will allow us to host a series of workshops across the year which encourages creativity and provides aspiring story tellers with the tools they need to put pen to paper.

“I look forward to seeing the talent this year will deliver, and who knows the next best seller might be lying here in Armidale waiting to be discovered.”

“Ursula’s book Leaf Stone Beetle tells a story about how these three pieces of nature were blown away from their homes in a storm but by chance they find community with each other,” he said.

“Through a workshop, public discussion and school presentations Ursula will discuss the themes of her book which link in with this year’s the Writers Centre Stories Connect program.”