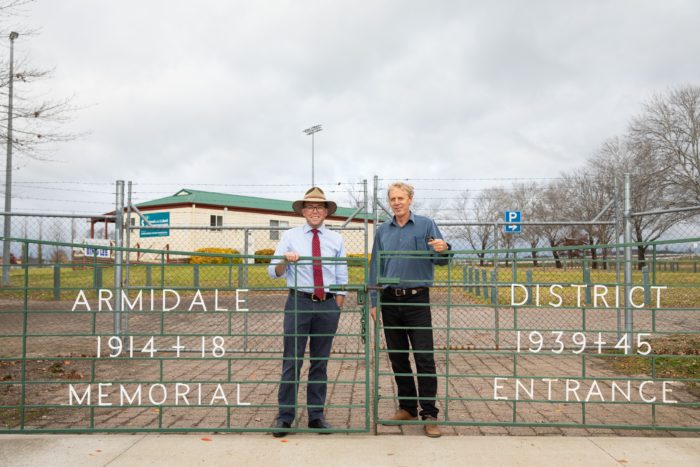 Mr Marshall said time had taken a toll on the entrance way, which is in poor condition and requires realignment.

“Two months after the conclusion of World War I, planning started to erect a number of memorials around Armidale that recognised the service of those who fought for King and country,” Mr Marshall said.

“According to an article in The Armidale Express, dated 20 July 1923, it was agreed the gates at the sportsground would be established as ‘a memorial more to the living’, in recognition of those returned service personnel who often played on the field.

“The memorial gates which stand today are not the originals, with a newer set installed between 1962 and 1966 when an army truck demolished the initial pair.

“So the gates not only look their best but act as a serviceable entry, this grant will allow new steel posts to be erected so they swing and function effectively.

“The gates are also being sand blasted and powder coated in heritage colours, keeping with the historic theme of the sportsground.

“This refurbishment will ensure that the War Memorial entrance to Armidale’s premier sporting facility remains in top condition, so that our community never forgets the sacrifices made by the men and women who fought so valiantly for our country.”

Armidale Regional Council Mayor Ian Tiley said the gates at the Armidale Sportsground were an important inclusion in the region’s war memorials and must be preserved.

“Council is very grateful to the State Government for providing much needed funds to ensure the gates are refurbished and honour our fallen heroes,” Cr Tiley said.

“Initial quotes for the project have been sourced from local contractors including Armidale Sand and Soda Blasting and Johnsons Mobile Welding for the completion of the restoration works.

“The memorial gates have stood proudly since 1923 and will continue to do so for many years to come.”