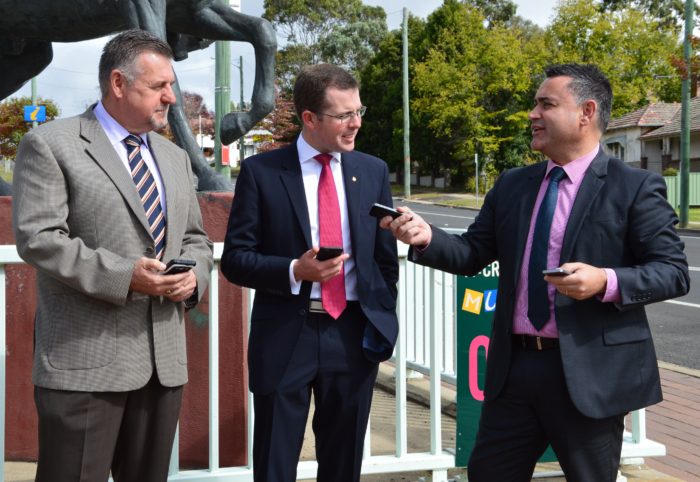 Mr Marshall was joined by Regional Development Minister John Barilaro in Uralla today to make the announcement and explain details of the new funding agreement.

“Under the agreement the NSW Government will work closely with the Commonwealth Government and telecommunication carriers to ensure country communities enjoy better mobile phone coverage, including those in the Northern Tablelands,” Mr Marshall said.

“We have allocated $25 million over four years to eliminate some of the state’s worst mobile phone black spots and we’ve leveraged an additional $35 million from mobile phone carriers to increase the number of towers country people will see constructed.”

Mr Marshall said the partnership would see an investment of tens of millions of dollars into mobile communication infrastructure in the bush to help families, businesses and emergency services stay connected.

“It is hoped that through this partnership NSW will receive 130 new mobile towers and extend coverage to more than 20,000 properties that currently miss out.

“In the election we promised regional NSW would not have to worry about the stress and hassle associated with mobile black spots, which are costly and inefficient.”

“We are determined to support the delivery of as many new mobile base stations in NSW as possible and have structured our contribution to target more sites and extend coverage to rural and remote areas of the state,” he said.

The Commonwealth has committed $100 million (GST exclusive) over four years to the delivery of the Mobile Black Spot Program and is expected to announce the successful funding recipients and locations in June 2015.

Mr Marshall said he’d been liaising with the Minister and his Federal counterparts to ensure Northern Tablelands secured as many new mobile phone towers as possible to address bad black spot areas.