$26,980 TO RESTORE HISTORIC TENT HILL HALL TO ITS FORMER GLORY 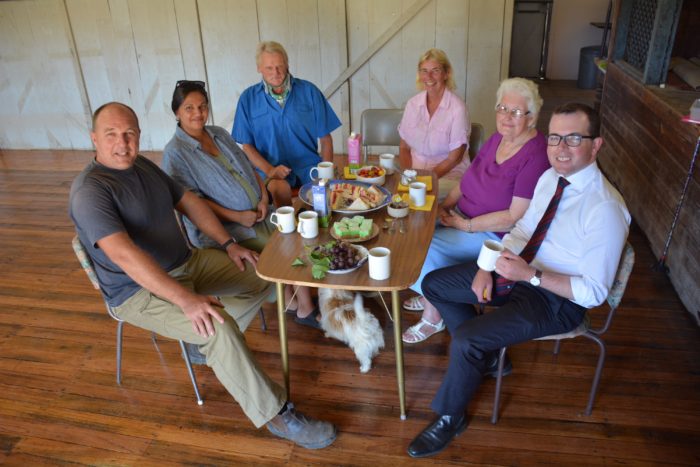 IT might not herald a return to the good old days, but Northern Tablelands MP Adam Marshall says a $26,980 State Government grant for the Tent Hill Public Hall will give it a much-needed facelift, inside and out.

Mr Marshall announced the funding for the hall’s trustees to paint the exterior and interior of the historic public hall, about five kilometres east of Emmaville on the Deepwater Road.

“The locals around Tent Hill have plenty of functions in the hall that do ‘raise the roof’ when it comes to a good party but this grant will actually make it more comfortable, amenable and maintainable,” Mr Marshall said.

“It’s the only gathering point for miles around for the locals so bringing it up to a new standard increases its attraction for future functions.

“It was built in the late 1880s in the tin mining boom but was moved from the original site across the road to where it sits now and it’s used often so this funding meets a very real community need.

“The Australia Day celebrations were held there a couple of years ago and there was a turnout of about 140 people so that alone demonstrates its worth.”

Mr Marshall said Tent Hill was a small but close-knit community and the hall was a great little building.

“It’s a humble little hall made from hand cut, local timber and it remains almost entirely in its original condition, which is probably the main reason for its historic charm,” he said.

The Tent Hill Public Hall has been used for various events over the years, including travelling shows, dances and polling booths for State and local elections. One of the longest running events held there commenced in the early 1940s – the annual village Christmas party that focuses on the children and Santa’s impending arrival.

“I particularly wish to commend the Tent Hill stalwart Ambrose Seagrove,” Mr Marshall said. “Ambrose became one of the first trustees at the age of 19, and spent countless hours working on the hall with wife Judy until his passing late last year.”

Mr Marshall said the repainting works would build upon several successful projects spearheaded by the Tent Hill Community and supported by the NSW Government.

“With previous funding, the Tent Hill Public Hall has had its floor completely sanded back and revarnished, with a new wall and ceiling installed to better protect the community from the elements,” he said.

“When these painting works are finished over the coming weeks, this century-old hall will soon look as good as new.”

Works will commence in early March, following a ‘cent auction’ at the Hall on February 27.

The grant has been provided under the State Government’s Public Reserves Management Fund Program which is supported from loan interest, leases and licences on Crown land.