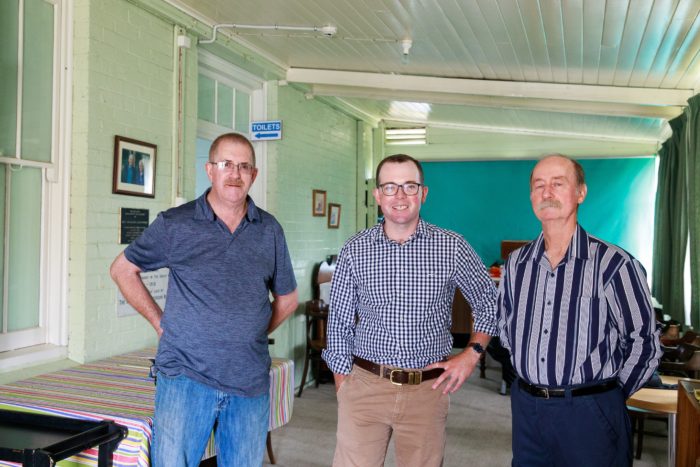 FOR the first time in more than a year the Glen Innes Mineral and Gem Club will have a permanent home to meet, conduct classes and store their glittering collection, with Northern Tablelands MP Adam Marshall today announcing a $27,000 State Government grant to support the construction of a new clubroom.

Mr Marshall said the announcement marks the end of a twelve month treasure hunt, as the club searched for a suitable site to call its own.

“Using this funding Glen Innes Mineral and Gem Club will purchase and erect a shed on a parcel of land on Penzance Street, which has been provided to it by Glen Innes Severn Council,” Mr Marshall said.

“At its meeting in September council unanimously resolved to allow the club to use the vacant site for a period of 10 years, with the option of a further ten if needed.

“Once built, the new shed will be converted into a separate clubroom and workshop area, where members will again offer classes and training in gem cutting and polishing, silver jewelry making, faceting and mineral identification.

“The shed will also provide a lockable space, where members can store their specialised fossicking equipment. Until the new shed is built the Club will be permitted to operate from a building on Bourke Street.

“Patience is an important trait amongst fossickers and I commend members of the club for their persistence in working with council and myself to find the right location. Their perseverance has turned up an absolute diamond of a site, where the can base themselves for many years to come,” Mr Marshall said.

“Our club was incorporated in 1989 and since then has accumulated an extensive history of the mining and fossicking of the area, along with a large, locally sourced, mineral collection,” Mr Griffiths said.

“At its peak, the club had over 70 active members. Without a clubroom, the membership has dropped to 23 and all of its equipment and displays are being stored in various member’s garages and are not available for use.

“A dedicated clubroom will allow our collection to be brought together under one roof and assist us to pass on our accumulated knowledge and skills onto new and younger members.

“This new clubroom will be built using local contractors and tradespersons and is expected to be completed by the end of 2021.

“We are all so extremely grateful and appreciative of the funds granted by the NSW Government and thank Adam for his support – without him the club would have no other option than to disband.”