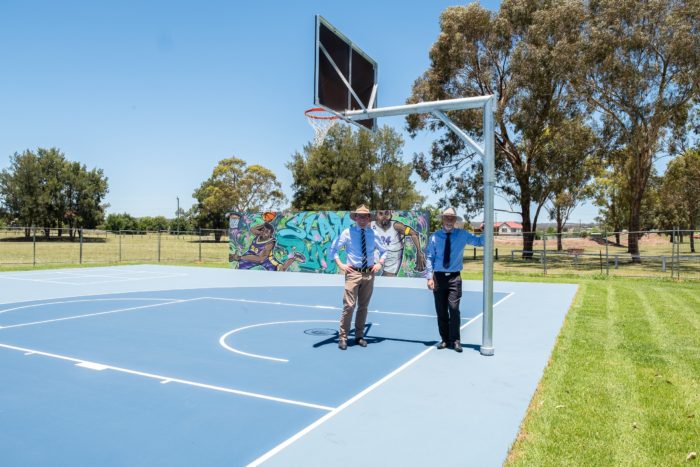 The State Government provided Council with $89,000 to transform the largely disused open space into a vibrant youth hangout.

“In recent years Inverell Shire Council has embarked on a program to improve public parks and areas, as a means of making the town more attractive for young people to stay, live and work,” Mr Marshall said.

“As part of that program the community now has access to a half-court basketball court, which is within walking distance of Inverell’s CBD.

“A new street-art wall has been constructed near the court with an artist painting a mural depicting young people playing basketball.

“Next year council will engage young local artists to paint the back of the wall.

“Three solar powered shade shelters, equipped with charge points for mobile devices and solar lighting, have also been installed across the space.

“What better Christmas present from Council to the community than these facilities open and ready for use over the holidays?

“This activation of the skate-park compliments the more than $2 million spent on the off-road cycling track and Lake Inverell upgrade, providing outstanding outdoor recreation facilities where people can be active and healthy.”

Mr Marshall used the park’s opening to announce an additional $28,416 grant to install lighting around the basketball court.

“With the basketball court available both night and day, it’s important for public safety the area is well lit,” he said.

“The solar lights will deter any anti-social behaviour which might take place after dark and hopefully protect the facilities from damage or graffiti.

“With the potential to benefit 3,500 people each year this project is a huge win for the Inverell community and I really encourage everyone one to get down there, engage with the space and make it their own.”