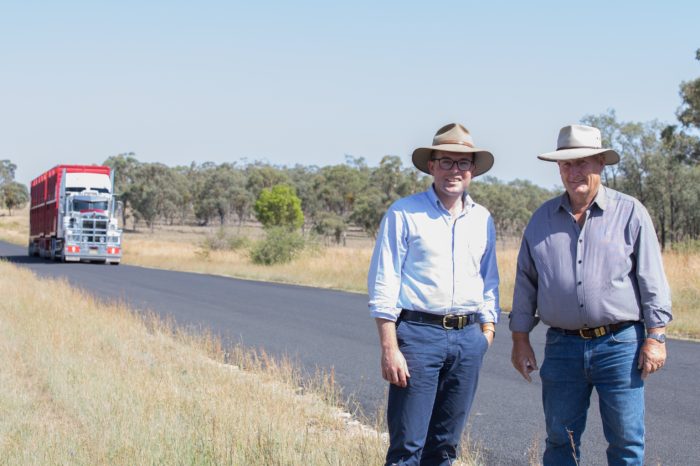 Men Marshall said the funding would see a 9.75 kilometre section of the critical freight route widened.

“The road is a well-used freight route for heavy vehicles, transporting cattle to and from feedlots and other feedstock,” Mr Marshall said.

“Over time the road shoulders have been eaten away and the carriage way is narrow and dangerous for motorists and heavy vehicles. It’s normal to see motorist having to put a set of wheels off the road to make room for a large truck to pass.

“Council will widen the road and strengthen these shoulders to ensure safety is improved for all road users.

Mr Marshall said the grant was important to help ensure that upkeep of freight routes ensures that farmers are still able to get their feed into their properties.

“The fund is available to aid councils that have been hit hard by the drought to ensure that their freight routes are being maintained and not falling into a backlog,” Mr Marshall said.

“This is important in ensuring safety for the drivers but also making sure that there’s no further degradation of the road making sure local users aren’t negatively impacted either.

“These sorts of improvements are vital right now in ensuring heavy vehicle access, in support of drought relief.

“The changes will support farmers impacted by the drought by improving heavy vehicle access on local roads, which has increased as a result of the drought conditions.”

Gwydir Shire Mayor John Coulton said that roads were a major expense for council and they regard them as a priority.

“The council really appreciates the funding to undertake this work,” Cr Coulton said.

The Drought Relief Heavy Vehicle Access Program was announced in October last year and offers an additional $15 million toward the cost of maintenance and minor improvement work on council roads and roadsides.

Eligible councils can apply for up to $300,000 to help with road maintenance and improvements to accommodate increased freight movements.

Armidale Regional and Uralla Shire Councils have also received funding from this program.

Tuesday, 25 February 2020 HIGH School students from Armidale, who are studying hospitality or business, will soon have the opportunity... Read More