$286,781 TO EXPAND EDUCATION OPPORTUNITIES AT BACKTRACK 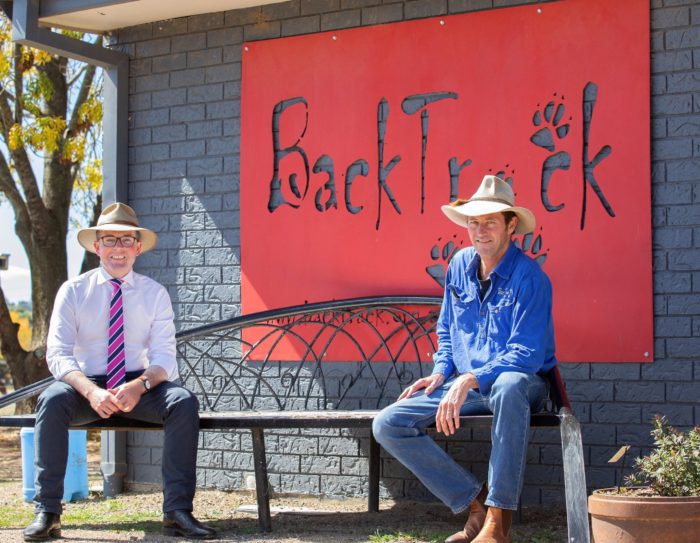 MORE sparks, of the welding kind, will soon be flying out of a new expanded training facility at BackTrack Youth Works, with Northern Tablelands MP Adam Marshall barking for joy with the news a $286,781 State Government grant to expand the organisation’s base at Armidale.

Mr Marshall made the announcement today with BackTrack CEO and founder Bernie Shakeshaft.

“BackTrack’s student base has increased dramatically in recent times, with the organisation outgrowing its current facilities,” Mr Marshall said.

“Every week more than 50 young people turn up to the facility in the hope of re-engaging with their education and learning agricultural and trade skills which will help them enter the workforce.

“In 2006, Bernie and his team took over the old Armidale Dumaresq Council depot, setting up the metal fabrication workshop and classroom for disadvantaged young men. Since then young women have become part of the program creating the need for more diverse amenities on site.

“I’m pleased to say this grant will allow the construction of a new amenities block to cater for both male and females, a kitchen and common area for everyone to hang out in and a brand new showroom for students to display their talented work.

“A dedicated space will also be established to provide social and sporting activities which previously were not available on site due to it being a workshop.”

Mr Shakeshaft said the redevelopment would allow the organisation to continue to expand its reach.

“Our site on Waterfall Way is the only home many of our young people know, and in many cases is the first place they truly feel a sense of belonging and even family,” Mr Shakeshaft said.

“The success of the program has resulted in increased numbers of young people attending and it was identified that we require additional space which is more youth focussed, to cater for growth moving forward.

“Significantly, expanding the premises will also allow us to increase the number of people who can attend the BackTrack Open Days each year.

“We work with various youth organisations from across NSW, educating them about our program so they too might benefit from the BackTrack methodology.

“We are really excited about this funding and hope to get the ball rolling on the project very soon. Our own social enterprise BT Works will be employed as a sub-contractor on the job, which will create employment and training opportunities for people within theat program.”

Mr Marshall said the heart of the organisation, its educators, would also benefit with a new office block and work space to be built.

“While BackTrack was the idea of one man it takes a team of many to administer, teach and support the successful program,” he said.

“BackTrack has 20 staff members working across its various areas and this additional space will allow them to better support the diverse needs of their participants.

“I’m glad the State Government has been able to provide this financial support to help keep BackTrack delivering this positive change.”