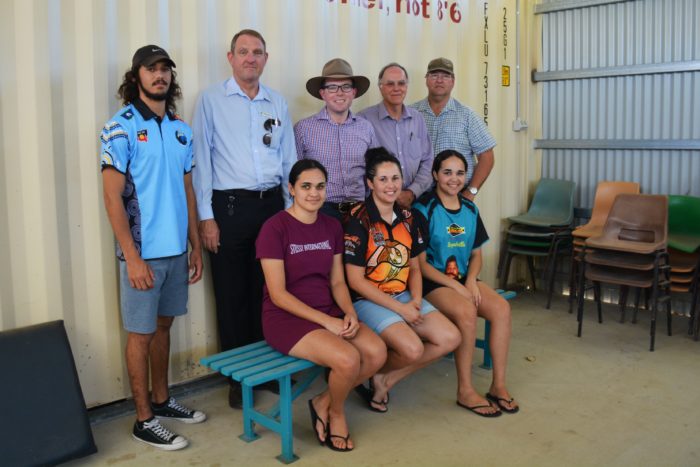 RUGBY league players in Boggabilla have a new dressing shed to call home, with a $28,995 NSW Government grant supplying the current Group 19 premiers Macintyre Warriors with a new change room and storage unit.

“These facilities will finally give the Macintyre Warriors’ players a comfortable place to change, rest and store equipment out of the harsh elements,” Mr Marshall said.

“The upgrades provide a permanent solution for the Warriors’ four local grades and are facilities that better reflect the club’s strong presence in the Group 19 Rugby League competition.

“The large change room provides privacy and comfort for players, who previously had to change into uniforms in the toilet block or before heading to the reserve.

“An insulated roof ensures that the large, airy room is several degrees cooler than outside.

“The new facilities will also make preparation for matches and weekday training easier on coaches and volunteers, with an oversized shipping container providing plenty of space to securely store training gear and equipment.”

Mr Marshall said the Macintyre Warriors had more than proven their worth in their two seasons since charging into the Group 19 Rugby League competition.

“Starting from scratch, the Warriors have made the finals both years they’ve been in the competition – taking down Armidale’s Narwan Eels this year in the grand final, in front of a crowd of 2,500 fans,” he said.

“The Warriors have rapidly become the heart and soul of Boggabilla and Toomelah – proving that sport can become a valuable social focal point for regional towns.

“Thanks to these new facilities, new uniforms, and seating provided through NSW Government grants, the club can manage this tremendous growth in popularity sustainably.”