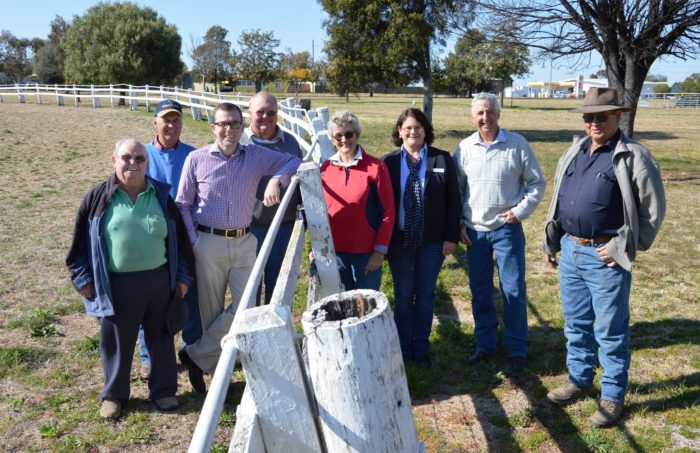 The trustees gathered at the reserve last Friday morning to meet Mr Marshall and discuss their plans with him.

Mr Marshall said he had previously stopped at the reserve to inspect the arena fence and was well aware that it was time it was rebuilt.

“The trustees had pointed out to me that the only thing keeping the 50-year-old fence up was the paint, so I was very keen to support their funding application,” he said.

“It is the first time the trust has applied for a PRMF grant and I’m delighted they’ve been successful.

“The grounds are used on a regular basis by a number of local groups. They have a campdraft there twice a year and can have anywhere up to 600 runs over the course of the weekend. It’s a huge event and well supported by locals.

“A sheep dog trial was staged on the grounds last weekend and the Stockhorse Border Branch uses it on a regular basis. The Zone 8 Pony Club holds regional schools there and they hope to have a cattle dog trial once the new fence it up.

“The reserve has become a very important focal point for the local community and wider district.”

Mr Marshall said the grant would cover the cost of the fencing material and the labour would be provided by the user groups and the hard-working Trust members.

“It’s a great outcome, it’s a well-used community asset and therefore well worth the investment,” he said.

“I’m now looking to assist the Trust work on the next project of expanding the existing amenities block at the grounds.”