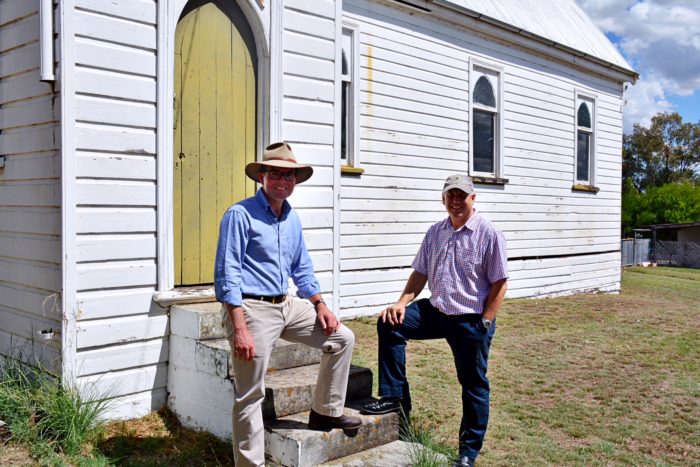 GENERATIONS of Warialda’s churchgoers spent their Sunday mornings at the former Anglican Church and 50 years since the last service, the hall will be brought back to life with $29,120 in NSW Government support, Northern Tablelands MP Adam Marshall announced today.

“This beautiful old building has an important place in the Warialda Community, holding thousands of sermons since it was built at the turn of the 20th Century,” Mr Marshall said.

“In addition to providing spiritual guidance, St Simons and St Judes has been a meeting place for several generations, with events held here celebrating Warialda’s good years and helping dull the blows of tougher years.

“The hall has been used as an important space for community events, Sunday School and functions since it was replaced by a new Anglican Church in 1966.

“This funding will patch up years of damage, restoring it to its former glory and opening it up for the large functions and community events for which it’s renowned.”

The project has been funded through the NSW Government’s Community Building Partnership program, with the parish contributing $5,470 of its own funds for the build.

“These upgrades have already raised and levelled the 116-year-old floor, ensuring it’s a safe and predictable surface for visitors young and old,” Mr Marshall said.

“The existing toilet block has been dismantled, allowing the construction of a deck and doorway on the southern side.

“From here the kitchen will be upgraded, a new toilet block built and the building refreshed with a new coat of paint.”

Reverend Waller said the parish was raising funds for a youth worker, with plans to use the hall as a drop-in centre in coming years.

“We’ve run activities for youth in the past, we’re not able to do that without an appropriate facility,” Rev Waller said.

“When I first arrived here, we had dinners and other functions in the hall, but more recently, the facilities haven’t been able to be fully used.

“We’ve got help from outside as well, from the Bush Church Aid Society volunteers, called Nomads, and brilliant support from our local community.”