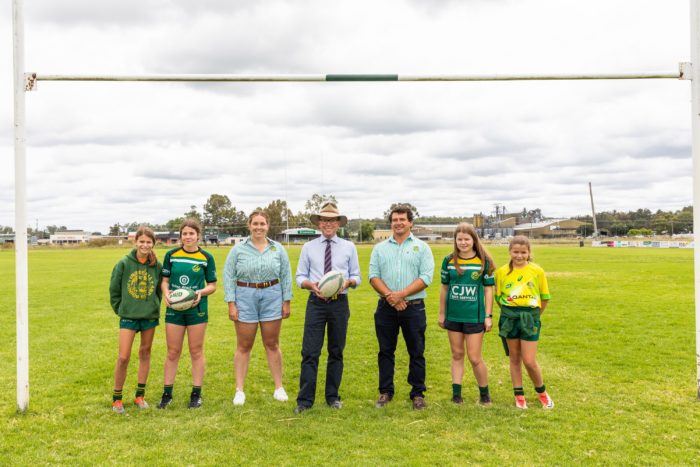 INVERELL Highlanders Rugby Union Club will line up a ‘conversion’ of a different kind in 2022, with Northern Tablelands MP Adam Marshall today announcing a $292,964 State Government grant to modernise its amenities and construct a dedicated female players and officials change room.

The grant was provided through round four of the Stronger Country Communities Fund, which supported projects to encourage female participation in sport.

Mr Marshall said Inverell Highlander Women had long been a dominant force in Central North Rugby Union competition and it was well time they had their own pre and post game space.

“With women’s rugby one of the fastest growing sports in the country, it is no longer acceptable for female players should to share change rooms and amenities with the men,” Mr Marshall said.

“This project will be a game-changer for local rugby, as the Highlanders construct dedicated women’s facilities with space for both home and away teams.

“The build will include appropriate change rooms, shower, toilets and space for female referees to prepare on game day.

“This project has been in planning for some time and I commend the club for its perseverance in fundraising to develop a rugby facility which is welcoming and inclusive of all players.

“This will no doubt better support existing players and hopefully encourage more women to get involved in the sport.”

Inverell Highlanders Rugby Club President Ross Fuller said over a number of years volunteers had worked to transform a grassy paddock into a high quality, multi-purpose sports and community asset.

“The Highlanders Rugby Club is extremely grateful to the Stronger Country Communities Fund and the opportunity to improve our facility for girls and women,” Mr Fuller said.

“This is an opportunity for us to give our female players the recognition they deserve, providing them with a safe and comfortable space to prepare for game day.

“We expect the project will take two years to complete and will result in a more comfortable and inclusive environment for the women and girls of Inverell and their opposition.

“The new amenities will ensure the club is able to evolve and meet the changing needs and expectations of the community.

“The greatest part of our sport is the outlet it provides for young people to challenge themselves and connect with others from across the region. I’m proud our club is working towards making that accessible to both men and women.”