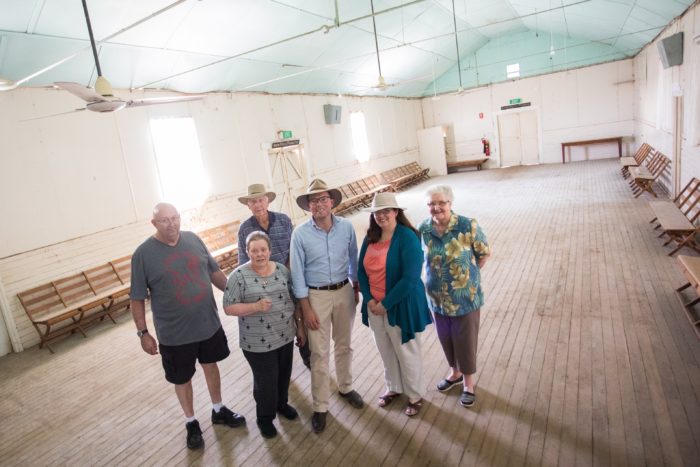 THE old disused Gravesend Hall is about to receive a leg up to bring it back to working order and modern condition, both physically and socially, according to Northern Tablelands MP Adam Marshall.

Mr Marshall today announced a $29,628 grant from the State Government grant towards the hall rejuvenation program that would see renovations to restore the hall to its rightful place in the community.

The bulk of the work will involve major re-stumping of the old wooden foundations, replaced with new steel adjustable pylons under much of the kitchen and dining room areas, the stage and main hall.

“The Gravesend Hall has a lot of history and many fond memories for locals attached to it but for many years hasn’t been used at all,” Mr Marshall said.

“With no use, the hall has deteriorated significantly, but now with a new management committee, under the auspice of Gwydir Shire Council, there’s new energy and enthusiasm to bring the hall back to where it can be a community asset once again.

“The new committee has some exciting plans, and with other grants from council and the Federal Government, they will tackle some other renovations but the whole project rests on getting the new stumps in.”

Mr Marshall said the group aimed to restore the hall to be a venue for school events, because the Gravesend Public School doesn’t have a hall and events like indoor markets in winter, or wet-weather functions like ANZAC Day ceremonies, wedding receptions, birthday parties, or public meetings.

“Importantly, down the track with some other internal works, it could also serve as an emergency shelter if there’s ever a need for local crisis accommodation,” he said.

Gravesend Community Group Treasurer Karen Withers said the works would give a new lease on life for the 109-year-old hall.

“This grant underpins an exciting new era for the hall, bringing it back to life and setting it up for more community events and functions in Gravesend,” Mrs Withers said.

“The hall’s 110th birthday is coming up in June, so it would be wonderful to think that the works could be completed to allow the hall to host those celebrations.”

Mr Marshall said the NSW Community Building Partnership Program funding would also see fire and emergency exit compliance works at the hall, as well as an electrical safety upgrade, including new push bars on doors and replacing a staircase at the back of the hall.