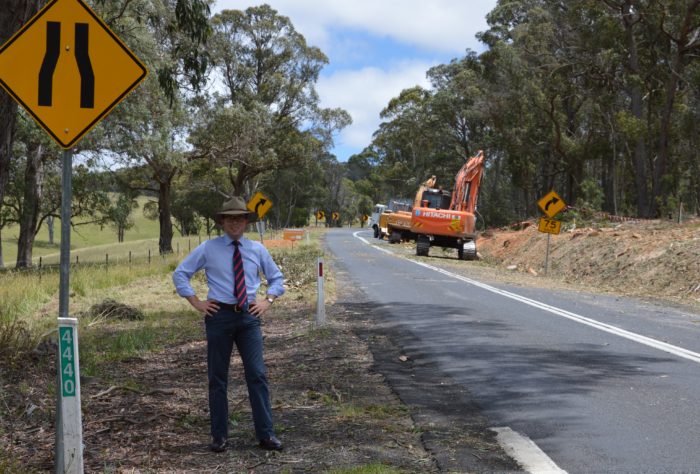 Mr Marshall said $3 million was being invested to completely rebuild and widen a dangerous two-kilometre section of the busy route between the St Helena and Four Mile Creek Bridges.

“Waterfall Way is a major freight transport route connecting the Pacific Highway on the coast to Armidale. It’s also an important tourist link that is seeing more and more traffic each year,” Mr Marshall said.

“This narrow and winding section of the Waterfall Way is notoriously dangerous with many near misses reported and, as late as a fortnight ago, a car was run off the road along this stretch. Luckily no-one was injured.

“I’m delighted to see the government has listened to our region’s request for additional funds to improve this section of Waterfall Way, which comes on the back of more than $2 million of upgrades closer to Ebor recently.

“I’ll continue to press the government for further funding to continue improving Waterfall Way, including more passing lanes for motorists.”

Mr Marshall said work had already begun on the major upgrade with teams already onsite clearly vegetation in preparation for the widening of the road.

“Work will include widening the road, rebuilding the road base, resealing the surface and then painting new road lines,” he said.

“Work will be carried out on weekdays from 7am to 6pm and Saturdays from 8am to 1pm with the project scheduled for completion in March next year, weather permitting.”

Mr Marshall said changed traffic conditions including lane closures would be in place for the safety of road users and workers. He said one lane would remain open at all times with traffic control in place to guide motorists safely through the worksite.

“Delays of up to 15 minutes may be experienced during work so I urge motorists to factor this in to their travel plans and be patient while the work is underway.”

In 2011 work was completed on the St Helena and Four Mile bridges to provide a safer crossing more suitable for large vehicles.