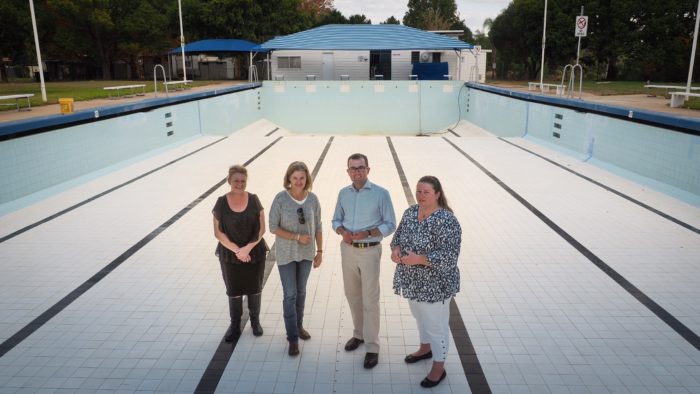 RACING off the blocks at Bingara’s town pool will be a lot less hazardous after the Bingara Swimming Club secured a $3,000 grant from the State Government to replace the rusting, slippery 1960s-vintage blocks now in use.

Delivering news of the NSW Sport & Recreation grant to the club executive, Northern Tablelands MP Adam Marshall commented that while the investment by was relatively small, the return would support new generations of swimmers.

“A lot of country towns built their public swimming pools in the years after World War Two and those facilities have given endless pleasure to the towns’ residents ever since,” Mr Marshall said.

“But half-a-century on, a lot of those pools are showing their age. It would be ideal to rebuild those facilities using the latest technology, but with other priorities on the public purse, the least we can do is invest in keeping them safe and functional.”

“This grant is about doing just that.”

Bingara Swimming Club President Nicole Dixon said the old blocks at Bingara pool were rusting and slippery, so that in competitions, swimmers had lost their footing and barked their shins while trying to launch themselves into a race.

Replacing the blocks is a small but important step in maintaining a pool in which the town’s children have been taught to swim for more than 50 years.