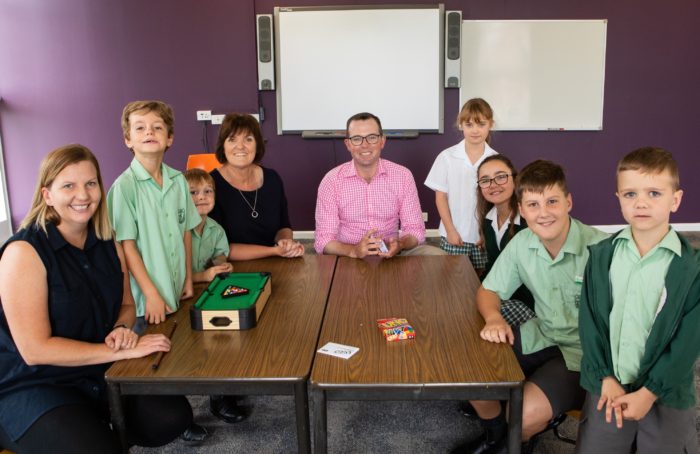 MEMBER for Northern Tablelands Adam Marshall last week visited the newly-opened before and after school hours care facility, located at St Joseph’s Primary School – the first of its kind for the Uralla community.

Mr Marshall joined Principal Judy Elks and the centre manager Kylie Shirdon to inspect the facility and meet some of the children and parents already taking up the new service.

Mr Marshall said the State Government provided a $30,000 grant from the Before and After School Care Fund, which was introduced to help deliver 45,000 additional outside school hours care (OSHC) places across NSW.

“This is a terrific initiative and one that has been sought after in Uralla for many years, and I commend St Joseph’s Primary School and its principal Judy Elks for taking the plunge,” Mr Marshall said.

“I know that some families from Uralla and the district have, due to work commitments in Armidale, enrolled their children in schools away from their home town due directly to the lack of any out of school hours supervision.

“This centre offers care 7am to 9am and then from 3pm to 6pm, Monday to Friday during school terms for any student who attends any local school.

“A well-regarded and long-established company – Sherpa Kids – are providing the service under the management of Kylie Shirdon.”

This government’s one-off funding meets the initial costs of establishing and fitting out centres and the Before and After School Care Fund.

“We, at St Joseph’s, are so happy to be able to provide the facilities for this service so that it can be available to the whole community of Uralla and the surrounding area,” Mrs Elks said.

“It is exciting to be able to support parents in this way by providing before and after school care for their primary school children. Working hours are not always easy to fit in with school hours.

“This service means that our Uralla families who work in Armidale or other towns now have the option of choosing Uralla schools for their children without the worry of who is available to supervise them until they arrive back from work.”