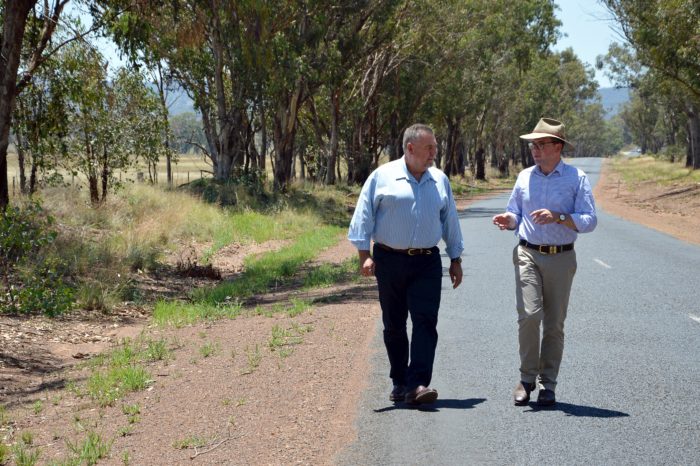 Mr Marshall said the funding was part of the government’s commitment to supporting local councils struggling with the drought.

“This funding will enable council to continue its works program widening and upgrading the road surface to the north of Bundarra,” Mr Marshall said.

“Council completed some works north of the town last year but the next few kilometres stretch is narrow and badly cracked on the edges, making it dangerous with increased heavy vehicle traffic on the road.

“Uralla Shire can now upgrade the next 1.5 kilometres of road, widening the shoulders and resurfacing and stabilising the existing road pavement.”

Mr Marshall said the funding was most welcome as the downturn in the local economy is resulting in councils having to stretch their budgets further to keep up with commitments and the Government is doing its part to try and reduce that strain.

The funding comes from the NSW Drought Relief Heavy Vehicle Access Program and eligible councils are able to apply for up to $300,000 to help with road maintenance and improvements to accommodate increased freight movements caused by the drought.

“I’m thrilled that Uralla Shire has secured the maximum amount available under the program for a vitally important road in our region,” Mr Marshall said.

Uralla Shire Mayor Mick Pearce said the funding was “fantastic news” for both the residents of Bundarra and travellers alike to continue to make the region’s roads as safe as possible.

“We’d like to give a big thanks to Adam Marshall and the state government for supporting our little shire,” Cr Pearce said.

“This allows us to bring forward this project that we would have likely stayed on the back burner for a few more years.”

The Drought Relief Heavy Vehicle Access Program was announced on 21 October 2018 and submissions will be assessed on a regular basis until the total $15 million pool of funds is exhausted.