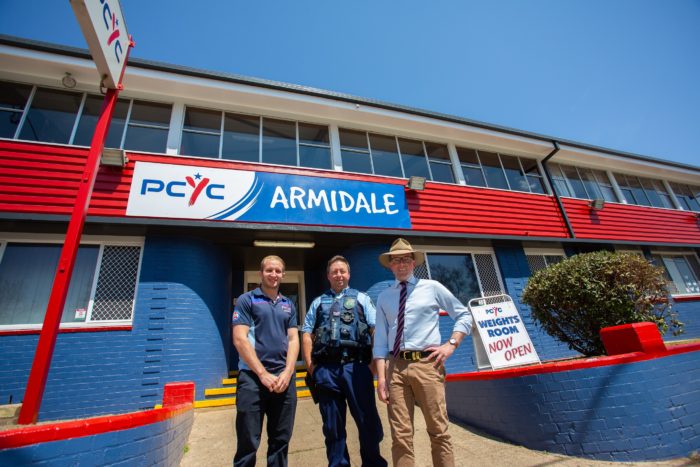 THE Armidale PCYC has become one of the brightest buildings in the city after undergoing a massive red, white and blue makeover, thanks to a $30,194 State Government grant.

“PCYC is an organisation which celebrates healthy living, fitness and wellbeing but unfortunately up until now it has been operating out of a building which was old and tired,” Mr Marshall said.

“This grant has allowed the building’s entire facade to be painted the iconic red, white and blue of PCYC, transforming it into a giant billboard promoting the organisation’s great work in the community.

“Over the years PCYC has done an incredible job building relationships between the police and Armidale’s youth and I congratulate them on the paint job which looks brilliant and stands out on the street.”

Armidale PCYC Manager Sam Davis said there could be no mistaking now what organisation operated out of 176 Rusden Street.

“Armidale PCYC is trying really hard to increase the number of people who are coming in and utilising our facilities,” Mr Davis said.

“We have so many great gym and health facilities to offer and with the building now visually more appealing I hope more young people will come in and get involved in the multitude of programs we offer.

“I want to thank Adam for his ongoing support of Armidale PCYC and its programs.”

Mr Marshall added initiatives like the Nanyapura Boxing Program run by PCYC were having a positive impact in the Armidale community.

“I acknowledge the work of PCYC, New England Police Inspector Roger Best and his team for bringing the local indigenous and non-indigenous community together in a program which aims to improve health outcomes and reduce local crime,” he said.

“It was great to see some of the participants taken on a special trip to Sydney recently as a reward for their efforts and contribution to the program.”