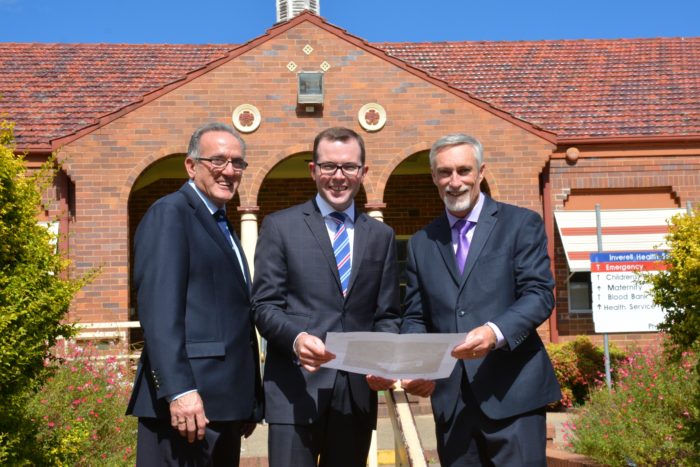 Marshall tells government to now ‘show us the money’

CONSTRUCTION work on Inverell’s $30 million hospital redevelopment has moved a giant step closer today with Northern Tablelands MP Adam Marshall announcing that the final business case and plans had been approved by the State Government.

“This was the final planning hurdle so all we need now is the capital funds to crack on, call for tenders and start the construction work,” a delighted Mr Marshall said.

“It’s now a case of ‘show us the money’ and I’ll be working as hard as I can over the next two months to ensure the first tranche of the promised $30 million is included in the upcoming State Budget so work can proceed, just as we’ve seen at Armidale.

“I’ve already made it clear to the government that this project is the number one priority for me and the community.

“The Inverell community has campaigned relentlessly for more than a decade for this redevelopment and I am determined to ensure its successful delivery.”

Making the announcement in Inverell today, Mr Marshall publicly released the plans for the redevelopment, which will see the construction of an almost brand new hospital on the existing hospital grounds immediately behind the historic structure.

“This redevelopment is not about refurbishing an ageing building, it will basically deliver a brand new hospital and that will offer state-off-the-art health care in the most modern and comfortable facilities in NSW,” Mr Marshall said.

“The redevelopment has been designed to cater for the health needs of the community now and well into the future.

“Having been through this process with the Armidale Hospital redevelopment, I can assure the Inverell community that they too will be impressed with the final design and eventual hospital construction.

“Unlike Armidale, around 80 per cent of this project will be brand new facility construction and only a small amount of refurbishment of the existing buildings.”

Mr Marshall said he was particularly pleased with plans to build a new and expanded renal dialysis unit, with extra chairs, and dedicated space for new medical imaging services.

“Renal dialysis has been at capacity for years at Inverell and the redevelopment will see a new and larger unit so locals don’t have to travel away so often to receive treatment,” he said.

“New medical imaging services have also been catered for, with a dedicated space set aside for a CT scanner in the hospital for the first time.

“Formal discussions will commence soon with the private imaging provider in Inverell to discuss co-locating their services in the new hospital.

“This has been a concept put forward years ago and I’m hopeful we can make it a reality very soon.”

Since receiving $1 million in planning funding in this year’s (2016/17) State Budget, the planning process for the redevelopment has progressed quickly.

Mr Marshall said this had been deliberate, with him applying pressure to Hunter New England Health and NSW Health Infrastructure to complete all the planning well before the end of the financial year, so he could be lobby the government for the first chunk of the $30 million to start construction this calendar year.

“This is much quicker than the same planning process for the Armidale hospital redevelopment, which is now well into construction after receiving $26 million in the last budget and I want to see the same for Inverell occur very soon,” he said.

The redeveloped hospital will include the following services in a new building:

Now that the business case has been approved Mr Marshall will shortly write to every resident of the Inverell district to provide them with an update on the redevelopment.

Mr marshall said Hunter New England Health would hold a public information session about the redevelopment, at a time yet to be determined, and there would be an opportunity to ask questions of the NSW Health Infrastructure experts as well.