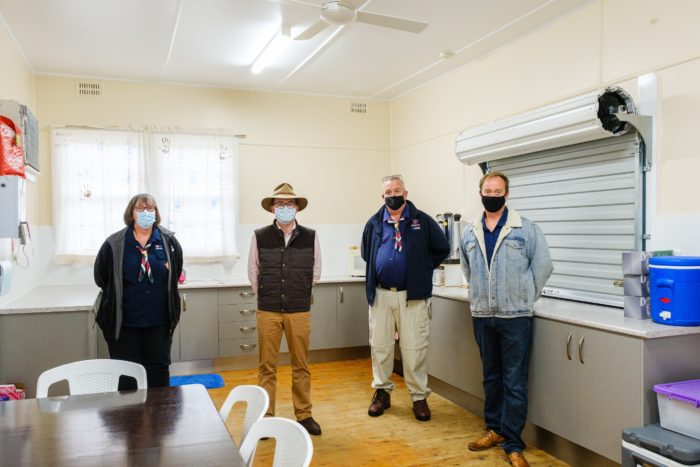 Since early last year, $87,000 has been provided by the State Government to modernise Inverell Scout Hall.

“With a refurbished kitchen and new disabled toilet, Inverell Scout Hall is now accessible to more users than ever,” Mr Marshall said.

“To ensure these great facilities are protected from damage and users are kept safe, Inverell Scouts are now moving to upgrade security onsite.

“To do this, the existing wooden fence that surrounds the Inverell Scout Hall, will be replaced.

“The new fence will be colorbond on the sides that border the Inverell Caravan Park, with Titan security fencing for the other two boundaries.

“The new fence will reduce ongoing maintenance costs currently facing the organisations, with the wooden section of the fence often leaning over or losing panels.

“Also old wooden window frames, which are showing signs of rot, will be renewed with metal security windows.

“These works are the natural next step in the upgrade of Inverell Scout Hall. By securing the building, group leaders make sure the refurbishments are and Scout members and hall users remain safe.”

Inverell Scouts Group Leader Jon Cox said the organisation’s membership is benefiting greatly from the support of the State Government.

“Not since the building was constructed more than 60 years ago, has so much work been done to modernise and improve Inverell Scout Hall,” Mr Cox said.

“Currently we have around 30 youth members and leaders which utilise the building weekly for programs.

“The hall is also used twice a week by a local karate club and is regularly hired out to the community for functions, generating us an income income for ongoing maintenance.

“I’m so pleased with the steps taken to enhance the functionality and look of our hall. Along with the mural on the western wall we were also able to put in a new kitchen and wheelchair toilet, which has increased the building’s accessibility to a wider section of the community.

“Inverell Scouts plays an important role in fostering leadership skills and friendship in local youth and I recognise the State Government for its support in allowing our work to continue.”