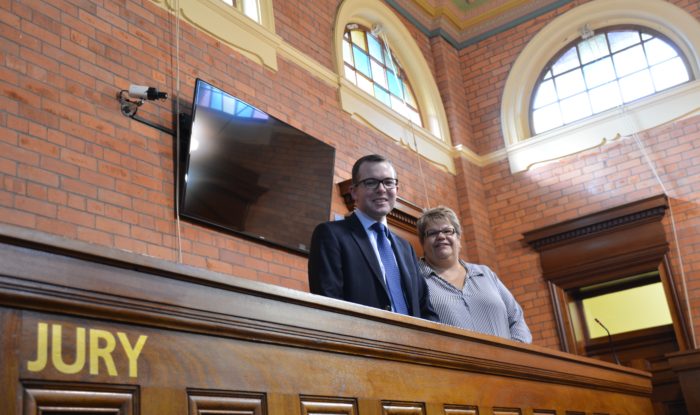 Mr Marshall today tested the technology during a tour of the heritage listed building, and said both courtrooms now have high-definition Audio Visual Links installed; bringing world-standard technology to the 155-year-old courthouse.

“Moree’s local court has seen the tremendous advantage of having an AVL installed – and now the district court can make use of the benefits to privacy, security and cost,” Mr Marshall said.

“Through use of the camera, courthouses can hear bail applications from prisons, testimony from remote witnesses or experts, and talk with vulnerable victims with privacy and security.

“This not only eliminates unnecessary travel, which will save thousands of dollars, but witnesses can speak up without fear of intimidation across a video link.”

The interviews can also be conducted locally, Mr Marshall said, with ‘in-camera’ interviews with witnesses occurring from the safety of a private room within the courthouse.

“This will significantly reduce stress and trauma for young victims or with crimes of a very personal nature – meaning that perpetrators won’t be able to intimidate victims into not testifying,” Mr Marshall said.

Mr Marshall said the AVL was installed mid-May and had already proved its worth.

“The AVL was used just days since it was installed, which gives an indication of how keen judges are to embrace this technology,” he said. “With the latest technology in both courtrooms, our judges and magistrates will be better equipped to minimise delays during court proceedings.”

Each of the upgraded courtrooms have received a new laptop computer for presenting evidence and a document camera for magnifying exhibits and projecting them onto a new 65-inch LCD screen.

AVL is now operating in hundreds of justice facilities across NSW including 203 courtrooms at 76 locations, including Inverell, Armidale and Moree.