$34,700 IN GRANTS FOR URALLA SHIRE COUNCIL TO UPGRADE GROUNDS 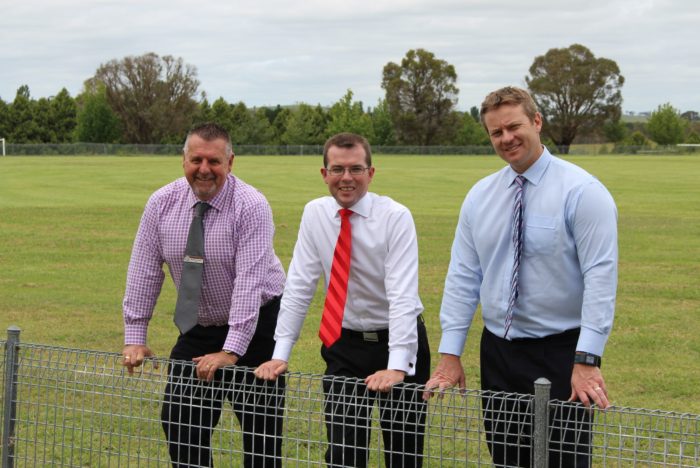 URALLA Shire Council will soon be getting on with the job of building a new canteen at Uralla Sports Ground thanks to a $28,700 grant from the NSW Government Community Building Partnership fund, Northern Tablelands MP Adam Marshall said today.

Mr Marshall delivered the good news to council last week and said the $57,400 project would be of great benefit to all user groups and he was delighted the NSW Government recognised the need to help small rural communities improve their sporting facilities.

“When I first met with Uralla Shire Council Mayor Mick Pearce and General Manager Damien Connor late last year, I was impressed with the proposal and pleased Council was being proactive in not only maintaining but upgrading their community’s assets,” Mr Marshall said.

“The new canteen will be a huge shot in the arm for local sport as the grounds are well-used and are particularly busy during the winter months with both the soccer and rugby league being played. It’s also a great way to give those clubs a new and very welcome stream of income.

“Council intends to continue working closely with the various user groups hoping these partnerships will lead to future funding opportunities – next on the ‘to do’ list for the sports grounds is new change rooms, new toilet facilities with disabled access and committee rooms.”

Mr Marshall said council had also secured a grant of $6,000 to extend the power supply to the western side of Alma Park.

“That area is a natural amphitheatre and is now being used by the Arts Council for musical events and they hold their annual Lantern Parade there so I’m delighted council has taken this step to put in power at the site,” he said.

“I’m right behind both these projects and pleased that, together with Council, we have secured this important funding.”

Uralla Shire Mayor Michael Pearce said council appreciated Mr Marshall’s support and pleased they could get on with the projects.

“It gets pretty cold at the Sportsground on winter’s mornings so having a canteen there and just being able to buy a coffee at the grounds will be great,” Cr Pearce said.