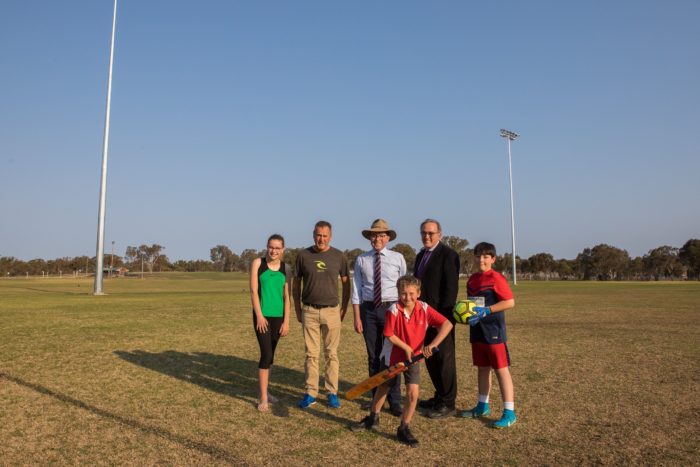 NORTHERN Tablelands MP Adam Marshall has announced another big funding boost of $350,000 for the Inverell Sports Complex that will see a dedicated athletics precinct built there and an upgrade to the turf cricket pitches.

Mr Marshall said the funding win would put the complex in the box seat to host athletics carnivals for more than 1,800 students and see it become home to the local Little Athletics group.

“This grant and the project it will deliver will cement Inverell as a sporting hub in northern NSW and the Inverell Sports Complex as a leader in country sport facilities,” Mr Marshall said.

“It is the next step in what has been a two-year plan by Inverell Shire Council to build on the facilities there and I’m especially pleased and proud to have helped deliver government funding of more than $1.28 million to this complex in just over 12 months towards that vision and that strategy.”

“This latest State Government funding really now cements our sporting facilities as top rate and the fact that Little Athletics will have a permanent home there is fantastic for them,” Cr Harmon said.

“It’s been a wonderful couple of years for the Inverell Sports Complex and for Inverell and this $350,000 for these upgrades is absolutely welcomed.”

Cr Harmon praised the level of government funding into local infrastructure and supporting council to increase services to the community.

Mr Marshall said the latest grant would allow the complex to host athletics carnivals for all local schools and become home to the 80 Little Athletics members.

“And because the Inverell Sports Complex is a multi-sport venue, the creation of the athletics precinct there will necessitate the rejuvenation of a turf wicket on the adjoining oval,” he said.

“This will enable Inverell to continue to host state-level cricket carnivals, which bring more than $250,000 a year into the Inverell economy. As the Minister for Tourism and Major Events I’m acutely aware of the value of sports tourism to any regional town – and particularly with young peoples’ sporting events which also bring parents and families with them –this latest project will really be the icing on the cake for Inverell’s sporting credentials.”

Under the latest plan, the upgrades at the complex will also include drainage, fencing, a sealed carpark, concrete paths and athletics throwing areas.

Mr Marshall said the Inverell Sports Complex was used year round by 11 different sporting associations and player numbers were continuing to increase.

“The largest user group, the soccer association, is expanding quickly, doubling its numbers in the past five years, and junior hockey is also a growing sport,” he said.

“Council recognises the value of infrastructure and sporting access for the community, and their proactive approach and strategic planning for sporting facilities, as well as their commitment to dipping their own hand in with financial support to these projects, means they’re on the front foot when it comes to getting government funding for such important projects.

“Sport is an integral part of many country communities, particularly in Inverell. It helps build social cohesion, creates a sense of community and greatly benefits the health and wellbeing of those involved, and financially it’s a huge magnet for economic development.”

Mr Marshall said recent council statistics showed around 65 per cent of Inverell’s community use the Sports Complex, providing for 10,000 uses per year – which will show a likely increase after the provision of improved lighting earlier this year, and the new project completion.

Under previous government funding of $930,000 earlier this year, a clubhouse was opened in May this year by Mr Marshall.