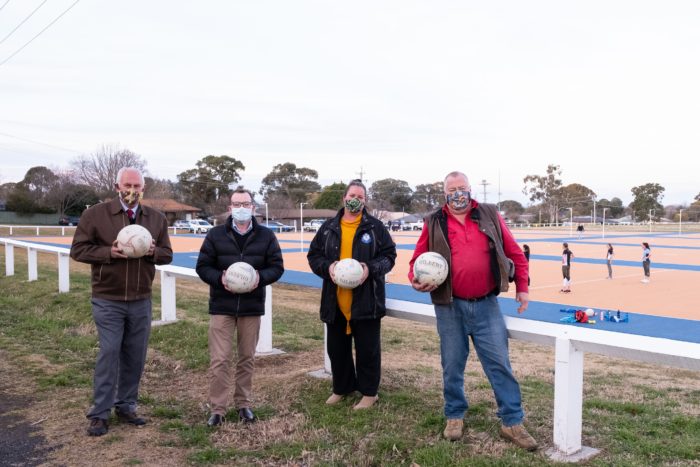 THE enhancement of Armidale’s Lynches Road netball complex is once again in the spotlight, with Northern Tablelands MP Adam Marshall today announcing a $350,000 State Government grant to install high quality LED lighting around all 10 courts.

The Armidale District Netball Association recently completed a State Government-funded $600,000 project resurfacing its 10 bitumen courts and Mr Marshall said the addition of lights would allow the association to maximise usage of the new courts, all-year-round.

“The Lynches Road netball courts have become one of Armidale’s great come-back sports stories, now the envy of netball clubs across the region,” Mr Marshall said.

“The natural next step in the upgrade program is to install suitable lighting around the playing area, allowing the association to expand the programs and competitions it runs throughout the year.

“The installation of lights will mean representative teams can push ahead with training during autumn and winter when daylight is limited.

“With night play now on the table Armidale will also be able to shoot for twilight netball.

“This will make the sport more accessible to players with busy schedules and also create opportunities for more social competitions.

“Both the netball association and council has considered this an important project for quite some time and I am delighted the State Government has been able to support the delivery of high-quality sports facilities for rural women.”

“The installation of lighting along with the recently completed court resurfacing will make the Lynches Road Netball Courts one of the best sporting facilities in our region,” Cr Tiley said.

“Council will be delivering the project in line with its procurement processes, which will mean the project has to go out to tender.

“It’s expected the project will be complete in the next 12 months.

“With lights in place the venue will be capable of hosting large scale, high level sporting events that will be of huge benefit to the local economy, whilst showing off the Lynches Road Netball Courts as one of the jewels in the crown of our wonderful sporting facilities in the Armidale region.”