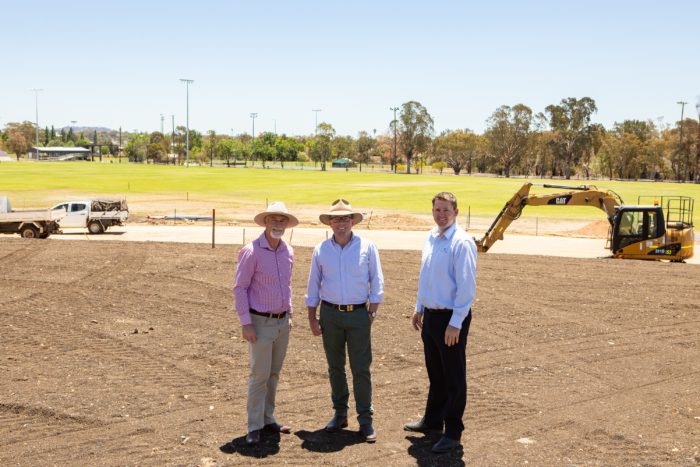 INVERELL Shire Council has hit the final straight on the construction of the town’s dedicated home for athletics, with Northern Tablelands MP Adam Marshall recently inspecting progress on the redevelopment of the Inverell Sports Complex.

The State Government provided another $350,000 for the project last year, under the NSW Stronger Country Communities Fund.

“Whether it’s training to sprint like Usain Bolt or hurdle like Sally Pearson, Inverell Shire Council is well on track to delivering a high class, multi-purpose athletics facility for the community,” Mr Marshall said.

“Council has started landscaping the hill overlooking the sport complex where it will install a dedicated area for disciplines like high jump, shot put and discus, while work to upgrade Eucalypt Drive to improve public access to the venue is also underway.

“Every year nearly two thousand students from Inverell participate in their school’s athletics carnivals and from next year they will have some of the best athletics facilities in the region to compete and hone their skills.”

“Eight individual clubs are playing in this year’s Inverell Cricket Association A-Grade competition and they will all benefit from being able to compete on a turf wicket,” he said.

“Inverell has a total of three turf wickets with this new one increasing the town’s capacity to host large scale local and regional cricket carnivals.

“It’s amazing to think every year around 10,000 people utilise the Inverell Sports Complex through 11 different sporting associations and what will soon be seven individual sports.”

This month improved drainage, fencing and new concrete paths were installed with the entire project expected to be finished before the end of the year.