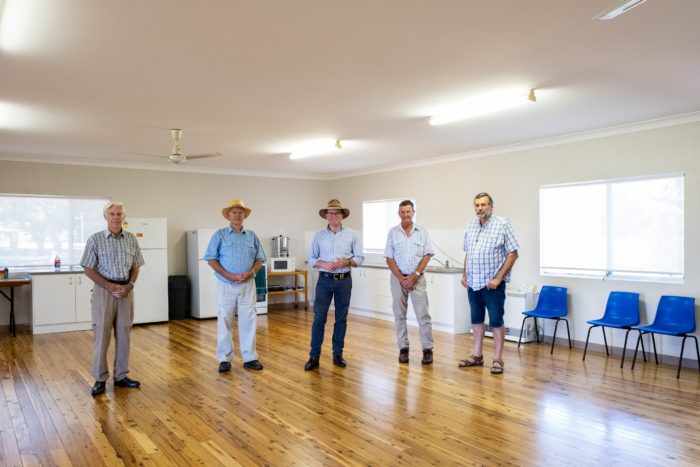 ‘COOKING-THE-MOTOR’ will be a problem of the past for members of Inverell Antique Motor Club members, after Northern Tablelands MP Adam Marshall today announced a $3,600 State Government grant to install air-conditioning in the club’s meeting room, Jack Gaukroger Hall.

“Just like the vehicles that are restored by members of the Inverell Antique Motor Club, the almost 40 year-old Jack Gaukroger Hall has recently been refurbished and given new life,” Mr Marshall said.

“Over the past year the user groups of the facility have embarked on a staged upgrade of the hall, installing a fantastic new kitchen and repolishing the timber floors.

“This grant will fund the next stage of works installing a split-system air-conditioner, which will make the hall comfortable all year round.

“The hall was built in 1984, for use by residents Macintyre Street’s Homes for the Aged, and as such the majority of users are elderly.

“In summer the building can get stifling hot and in winter bitterly cold, so the addition of air-conditioning will mean it remains a comfortable space everyone can use all-year-round.”

Mr Marshall said he looked forward to working with the club on its plan to build its own clubhouse.

“Growing from just 30 members 50 years ago to more than 100 today, the Inverell Antique Motor Club is a popular past-time for motor enthusiasts from across the region,” he said.

“The club has dreams of constructing its own clubhouse and creating a space where its members can meet, store memorabilia and share their love of historic motor vehicles.

“I know the club’s members are working hard to find a parcel of land to establish a permanent new home.

“I think a purpose built clubhouse would be a great way to grow its membership further and encourage the wider community to engage with their great work.”