$38,280 FUNDING FACELIFT FOR GLEN INNES LAND OF THE BEARDIES MUSEUM 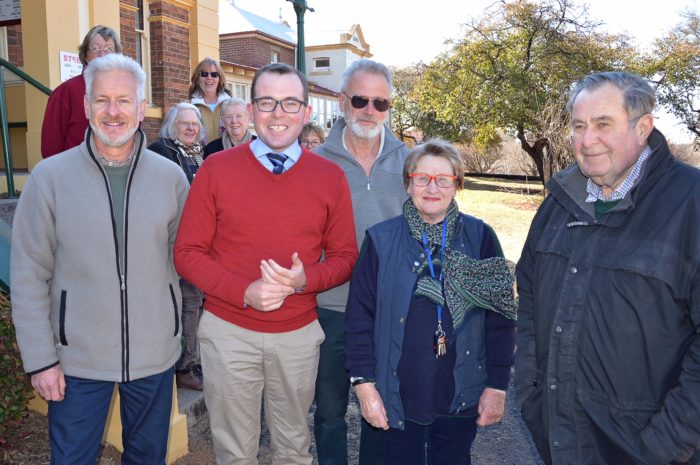 NORTHERN Tablelands MP Adam Marshall has delivered a $38,280 financial boost for a maintenance makeover to the face of the historic Land of the Beardies Museum at Glen Innes.

Mr Marshall announced the grant funds this week for the Glen Innes Historical Society to repair, replace and refurbish the façade of the main museum building at the corner of West Avenue and Ferguson Street.

The local MP said the funds would effectively repair some rotting, dilapidated sections of the impressive old building, refurbish the front and bring it back to its former glory.

“The Land of the Beardies Museum and research centre is based in what is a heritage-listed building that is central to the Glen Innes history story and the repository of thousands of pieces of that history,” Mr Marshall said.

“It’s a huge archival store and the history house of Glen Innes so I’m really pleased to be able to deliver this funding boost to keep it looking as good as it should.”

Museum manager Eve Chappell is over the moon about the funding windfall.

“We are absolutely ecstatic to be getting this grant, we are thrilled to have it,” she said this week when Mr Marshall visited to announce the funding.

“We will be putting $5,000 of our own money towards the project and many volunteer hours into preparing the site for the work and cleaning up after it.”

The history house is based from the old Glen Innes hospital, where the first parts of the complex were built in 1877. Major works came in 1906 and after then more extensions and additions to the original six-bed men’s ward.

The renovation works will centre on the heritage front façade and entry.

Mrs Chappell said a lot of the window frames had rotted and were in bad condition and some of the building panels dilapidated and in need of replacement.

After the repairs are completed by local builder Justin Power, it will be repainted, and in the colours suggested by heritage adviser Graham Wilson of ochre, green and cream.

Mrs Chappell said the latest project followed recent works on re-roofing the old nurses’ home, which sits adjacent to the old hospital building and is used by the historical society for storage. The adjoining old children’s ward building is used as a meeting place and for seminars.

The society was first formed in 1969 and moved into the old building less than two years later. It had been derelict for some time.

“I remember the possums and the rubbish we were confronted with back then and the work the volunteers did,” Mrs Chappell said.

“I took down the old curtains to wash them and they just fell to pieces, they’d been held together with dust.”

These days the history house and research centre boasts more than 13,000 photographs, maps and books and over 300,000 records to compile family and local histories.

Mr Marshall said the society’s museum façade works were one of 33 projects across NSW announced as a successful recipient of a Heritage Near Me Activation Grant.

“The program is designed to bring local heritage to life, and that’s exactly what the Glen Innes and District Historical Society is doing. It is a crucial role,” Mr Marshall said.

“The volunteers who keep that history alive for its community, and for other visitors to see, are to be congratulated.

“By encouraging the community to use and enjoy our heritage places we ensure they are valued and protected for future generations.”