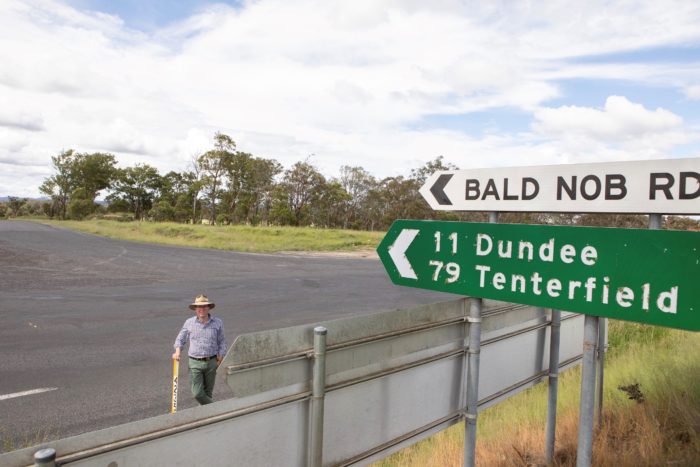 Northern Tablelands MP Adam Marshall at the intersection of Bald Nob Road and the Gwydir Highway, east of Glen Innes.

AN important local road which connects the Gwydir Highway and New England Highway near Glen Innes will soon be made much safer with Northern Tablelands MP Adam Marshall today announcing $398,500 for upgrades to Bald Nob Road.

Mr Marshall said over the next 12 months Bald Nob Road would undergo a series of works aimed at improving safety for motorists.

“Bald Nob Road might only be 11.7 kilometres long but it plays an important role in linking the region’s road network,” Mr Marshall said.

“People travelling inland from the Queensland border to Grafton on the New England Highway can shave 30 minutes and 40 kilometres off their trip by taking Bald Nob Road at Dundee.

“This funding made available through the Saving Lives on Country Roads program will allow Glen Innes Severn Council to widen the road and improve its alignment, making it easier for drivers to see oncoming traffic and obstacles.

“Also there a number of safety guardrails will be installed along the roads edge while several culverts along the road will be extended.”

Mr Marshall said the State Government had allocated more than $22.5 million for road safety projects in the Northern Tablelands for the 2019-20 financial year.

“We know living in country NSW often means a lot more time spent on our roads – and this program is about making those roads as safe as possible,” he said.

“From July, motorists travelling the New England Highway, Thunderbolts Way and notorious Waterfall Way will notice a number of works taking place including the widening and sealing of dangerous road shoulders, additional line marking and instillation of road barriers.

“Every life matters, and that’s why we’re investing in life-saving measures across our road network to see that every motorist who sets off on a journey makes it home to their family and friends.”

The Safer Roads Program comprises of the Saving Lives on Country Roads, and Liveable and Safe Urban Communities initiatives, which see targeted projects delivered for both the bush and city.