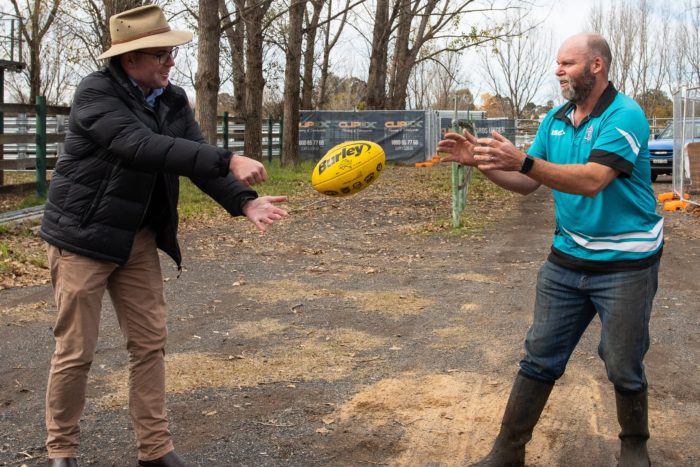 SUPPORT for Aussie Rules Football (AFL) in Glen Innes is charging ahead and to make the most of the forward momentum Northern Tablelands MP Adam Marshall has today announced a $4,000 State Government grant to grow the junior and female games.

Mr Marshall said the Glen Innes Celts were going from strength-to-strength, with this funding to support the development of Under 17 years boys and youth girls squads.

“In a time when every regional sport has to fight for new players, it’s great to see the Glen Innes Celts meeting that challenge head on,” Mr Marshall said.

“Faced with the loss of girls from its under 14s team next season due to age, the club will purchase new equipment including footballs, bibs, coaching boards and additional first aid kit, in a bid to keep the young players keen and interested should another playing option arise.

“To ease the financial pressure on players, funds will also subsidise the cost of bus travel to games throughout the North West AFL region, supporting the team whose community has been hit hard by drought and bushfire.

“With around 30 players, from Auskick age through to 17 years, registered to play with the Celts the club has a strong foundation of which to foster and develop its next batch of players.”

“Off the back of the successful AFLW competition, every year we are seeing more and more women becoming interested in AFL,” Mr Harvey said.

“Despite AFL North West deciding against running a Youth Girls competition for 2020, the Celts have continued to allow the older girls to train with the club, helping develop their skills in line with the NIAS youth girls development squad.

“It is our hope to offer some kind of Youth Girls gala games this year, with the dream of a proper competition hopefully coming true in the next year or two.

“The Glen Innes community has been very supportive of our organisation, and in turn we also want to give back, using a local bus company for transport.

“As we continue to grow our player numbers the club wants to work with Council and other funding bodies to install lighting at our home ground, King George V Oval, which will make winter evening training much easier and allow for exciting night games.

“AFL is a great game and I thank Adam for his support of our junior players.”

ACCESSIBLE AMENITIES TO BE BUILT AT MYALL CREEK MEMORIAL HALL