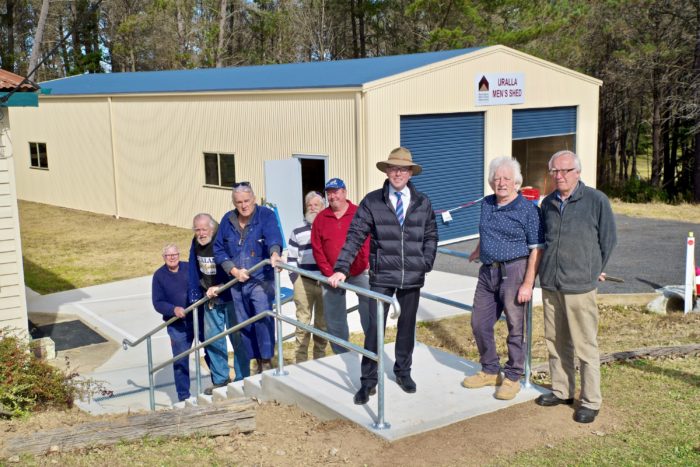 Mr Marshall said these latest projects were part of a strategy to secure the organisation’s long-term financial viability.

“Like most community groups, Uralla Men’s Shed runs on the smell of an oily rag, so any facility upgrades that work to increase financial memberships and drive down overheads is extremely beneficial,” Mr Marshall said.

“Of this grant $28,800 will be spent adding a water efficient emergency shower for use by members.

“A further $11,200 will be used to install of a 10-kilowatt solar power system that will help reduce its operating costs and support its ongoing sustainability.

“The Uralla Men’s Shed has become a home away from home for its 30 members, allowing them to gather to share their knowledge and experience which helps keeps them active and productive.

“I have a lot of respect for the Uralla Men’s Shed committee and the way it is continually striving to future-proof its facilities and meet the shifting needs of users.”

Uralla Men’s Shed President Roland Burnett said as custodians of the public facility, the Uralla Men’s Shed considers it important the building is developed and maintained for community use.

“We are pleased to be using local contractors who can provide the carpentry, tiling, plumbing and electrical work required,” Mr Burnett said.

“The work is to be completed in about two months once work commences.

“We are especially grateful for Adam’s support and help provided by our local Crown Land office staff to get the building up to standard.”

Mr Marshall also inspected a new set of access stairs, which were funded by a Crown Lands grant last year.

“Until now members have relied on a nearly non-existent wooden staircase, made of old railway sleepers, to gain access to the front of the shed form the car-park,” he said.

“Those old stairs have been replaced with a new concrete staircase 1.5 metre wide with hand rails on each side.

“This will ensure older, less mobile members have a safe and stable path to walk down during their visits.”

Since last year, the State Government has provided Uralla Men‘s Shed with more than $70,000 in financial assistance to improve their facilities.