$431,661 BRINGS ARMIDALE PLAYHOUSE THEATRE BACK TO THE STAGE 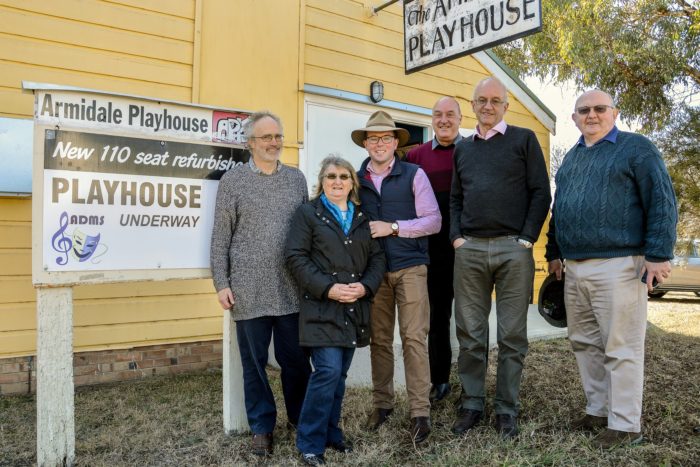 ONCE again the show will go on at the Armidale Playhouse, with the glitz and glamour of the West End returning to Beardy Street following a $431,661 State Government grant, announced today by Northern Tablelands MP Adam Marshall.

The funding, from the NSW Crown Reserves Improvement Fund, will fully redevelop the inside and outside of the dilapidated building as well as install disabled parking at the venue.

Mr Marshall said this long awaited redevelopment will restore the Playhouse as the home of amateur theatre in Armidale.

“I’m pleased to say after 15 years the Armidale Playhouse will be back in business with this considerable grant finishing the committee’s staged revitalisation of the theatre,” Mr Marshall said.

“Over the next 12 months the inside of the building will be fully refurbished with a new green room and spacious dressing rooms installed and walls knocked out to accommodate larger audiences and productions.

“Inside the main hall a load bearing beam will be put in allowing the stage to be extended and seating for up to 110 patrons to be established meaning once again musicals can be held at the theatre.”

Mr Marshall said a previous $80,000 grant from the government had already been spent restoring the foyer area of the Playhouse.

“This building which was first a school before it become the Playhouse’s home in 1968 is a local institution which deserves to be utilised and preserved,” he said.

“Last year the State Government funded the installation of a new toilet at the front of the theatre as well as the removal of asbestos.

“I want to congratulate the committee who over the years have raised thousands of dollars in a bid to fast track this upgrade.”

“This region has a thriving acting community and it’s very special that after such a long hiatus amateur thespians will again have a permanent base to perform out of,” Mr Horton said.

“Since the Playhouse went into recess productions have been shared at venues across the city including the TAS Hoskins Centre and Armidale Showground.

“This renovation of the Playhouse means Armidale will have a suite of high quality venues where productions can be staged.

“Not only is this building important for aspiring actors but it is also one of the first venues where stage crews cut their teeth and learn to use sound and lighting equipment.

“This grant will allow us to complete the full range of works including the painting of external walls making the tired old building appealing both outside and in.

“We have already engaged a local builder to do the works and are hoping construction will be complete by the second half of 2020.”