$4,479 PUTS SOME AIR IN THE TANK FOR BINGARA FISH HATCHERY PROJECT 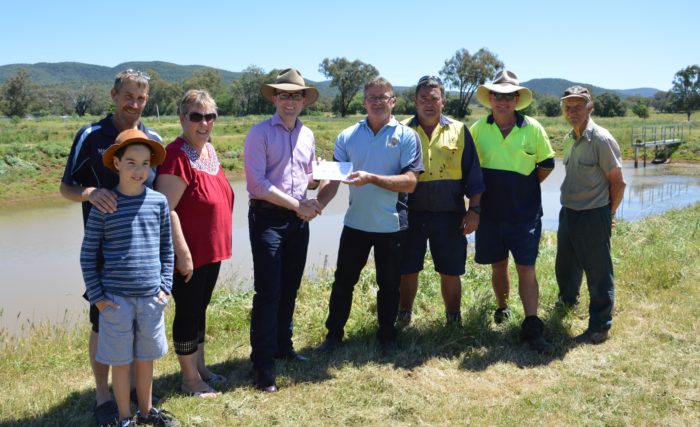 BINGARA is about to upgrade the fish habitats of some small fry that locals hope will bring big results for anglers down the track, according to local State MP Adam Marshall.

Mr Marshall delivered more than just a good line to the Bingara Anglers Club and Hatchery when he met up with membersto tell them the good news of a $4,479 grant that has come in the nick of time for vital fish breeding.

The funds will help the club put in 22 new air-lines and replace two blown up pumps for their breeding tanks for yellowbelly.

Club secretary Brian Riley says they’re hoping to get some excellent hit rates when it comes to spawning results and the numbers of fingerlings or fry they can breed up.

While he says the male fish are lazy buggers, the amount of air bubbles they can produce with the new lines is integral to getting them sexed up to do what they’re supposed to do – and help produce more baby fish.

Mr Marshall was given a first-hand look at the breeding environment at the hatchery – and a lesson in fish breeding – and he says the grant will help increase the amount of bubbles – and therefore, the numbers of potential eggs spawned in the tanks.

“And it’s the numbers that are crucial, we need to get more than five tanks spawning as many eggs as we can to meet the criteria for production but also we need a big survival rate to see the hatchery able to release more into our waterways,” Mr Marshall said.

“The club is hoping to get 60,000 to 80,000 fingerlings which will enable them not just to release some 28,000 into the Gwydir River, but the balance into Copeton Dam and Split Rock Dam.

“And when they do release them, they’ll be only about three centimetres long, so Brian tells me that if you blink, you’ll miss it all.”

The hatchery was first started 34 years ago mainly to breed fish for Copeton but last year was the first time for six years they’d been able to meet breeding rules.

This year, they’re hoping to really sex up the numbers and the new air lines and pumps are critical to the process.

The spawning season begins mid-December when they put the males into the tanks with the females and the process includes the fingerlings going into the outdoor dams or fry ponds early January and then in late February into the waterways.

The club has about 27 brood stock in their breeding dam.

“Recreational fishing is one of our most popular outdoor activities across the Northern Tablelands and the Bingara Hatchery and the anglers club there has been one of the most active and energetic supporters of breeding and fishing for years,” Mr Marshall said.

“I know every keen fisherman – or woman – will be hoping the breeding hit rates will go through the roof at Bingara – so they get a chance to catch some of those yellowbelly when they’re big and busting to get on a line.”

Mr Marshall said the recreational fishing sector in NSW generated around $3.4 billion to the State’s economy and accounted for more than 14,000 jobs across NSW.