$45,210 TO GIVE EMMAVILLE RIFLE RANGE A SHOT AT BIG GUN TITLES 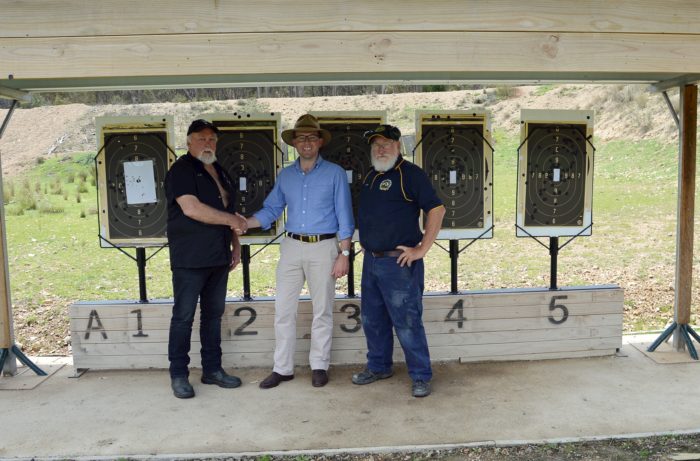 NORTHERN Tablelands MP Adam Marshall says a $45,210 State Government funding shot in the arm for the Emmaville Rifle Range will give it the extra firepower to host a future sporting shooters state title championship and other top gun events.

“This upgrade will give the club a really good shot at hosting some future sporting shooters events because they will have the amenities that are needed to do that, like suitable onsite toilet and shower facilities,” Mr Marshall said.

“The project will also deliver a rain water tank, septic system and all the associated pumps and plumbing designed to make it all work.

“The Emmaville Rife Range Committee is one of the most energetic and proactive shooting clubs in this region and this funding will help attract more big-name events.

“In fact, with the news of the upgrade the club has already been approached by organisers about the possibility of it hosting the 2020 Combined Services State Titles run by the Sporting Shooters Association, which has over 55,000 licensed members in NSW.”

Mr Marshall said the range was used every weekend by the five individual clubs which shoot there, including the Glen Innes Sporting Shooters, which has some 180 members.

“It hosts both rifles and pistol groups and is growing, with more shooters, particularly women and younger children,” he said.

Range Committee Secretary Evan Brown described the funding as a great shot in the arm for locals and for future plans to host more events.

“This is really good for us and for the community; it’s fantastic news,” Mr Brown said.

“We will get a brand new ablutions block for the range with an enviro-cycle septic system hooked up to it, and all the rain water tank, guttering and pumps,” Mr Brown said.

“We’ll have two toilets and two showers in a pre-fab block with all the grab rails and equipment for wheelchair and disabled access. The system will recycle water to our range and lawns too because we don’t have town water.”

The Emmaville range, just outside the village on the Glen Innes Road, was first established in the 1880s and used as a World War I training range before it was virtually closed in the 1950s and 1960s, before it had another shot at recreational use with a reopening about 18 years ago.

The latest funding follows a $26,219 grant announced by Mr Marshall a year ago for an electrical infrastructure upgrade to lay the groundwork for a total overhaul.

That funding allowed the club to move an existing 11kVA power pole, buy a new 25kVA transformer and metering equipment and install an underground supply to the range, so that it could connect directly into mains power for the first time.

The first utility connected to the grid was their turning target system, installed last year thanks to another $23,000 NSW Government grant.

Mr Brown said the latest works gave the club more firepower for attracting more shooters from interstate and outside the region.

“We’ve had three major grants and we’re pretty happy about all that and we owe the State Government and our local member Adam a lot of thanks for getting us to where we are now,” he said.