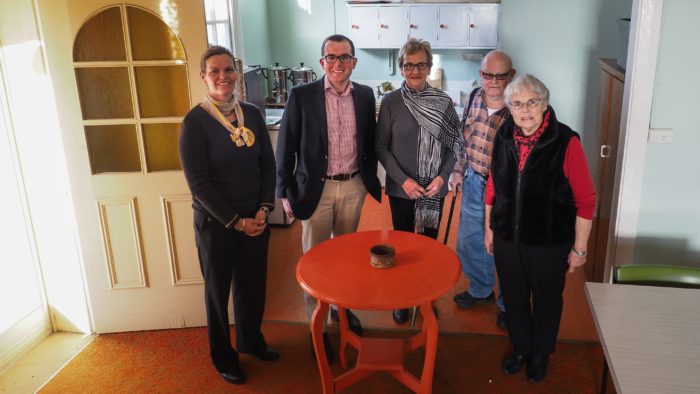 GUYRA’S handsome Soldiers Memorial Hall is getting a facelift with help from $45,768 from the State Government, with the aim of making the building a more attractive venue for small functions.

Northern Tablelands MP Adam Marshall announced the funding today and said it would enable the Guyra War Memorial Hall Trust to repair and upgrade the kitchen and bathroom areas to better equip the building, which was started in 1920, to be the community gathering place it was intended to be.

“This will help the Trust generate alternative sources of income to support its work with the hall,” Mr Marshall said.

“The Trust has previously accessed $19,139 from the Public Reserves Management Fund Program, which provided this latest grant, so that it could repair the hall roof.

“This is exactly why the program exists, to support community-managed public facilities that have few alternatives for revenue-raising.”

“With this new funding, the Trust takes another step towards restoring one of the finest buildings in Guyra to a real centre for community activities.”

The Trust’s Secretary-Treasurer, Naomi Davidson, said the funding was “greatly appreciated”, and fundamental to turning the 1970s-era kitchen and bathroom into facilities that met modern aesthetics and health and safety standards.

The earlier roof repairs enabled the Trust to put carpets in some areas of the hall, another important step in restoring its utility.

One of the most attractive buildings in the town, the hall has sometimes been neglected over its history. The current amenities were installed by the Guyra Quota Club in the 1970s, when the club made a determined push to bring the hall back into circulation.

“Public reserves in our region such as sportsgrounds, showgrounds, community halls, walking tracks and local parks are valued places which are used by our local community every day,” Mr Marshall said.

“This funding is not only vital to the success of our regional communities, but also supports the role our professional and volunteer managers play in the ongoing management of the reserves.”