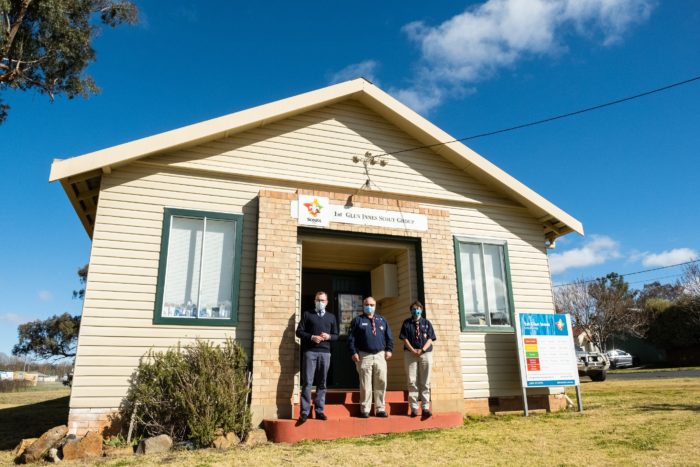 A PROJECT to modernise the home of one of regional Australia’s oldest Scout groups has received a $47,000 cash-splash, with Northern Tablelands MP Adam Marshall last week announcing the State Government grant to install a disabled toilet and shower room at Glen Innes Scout Hall.

Mr Marshall said the 1st Glen Innes Scout Group was progressing its plan to make the hall accessible to all members of the community.

“The building on Wentworth Street has been the home of the 1st Glen Innes Scout Group since the 1920s,” Mr Marshall said.

“Over the last five years steps have been taken to bring the building up to modern health and safety standards.

“A new kitchen was installed in 2019, following a fundraising effort by the community.

“The next upgrade on the list is the addition of accessible amenities, to service the needs of the disabled and those with limited mobility.

“This grant will see a wheelchair accessible room built which will include a shower, toilet, bidet and handrails.

“The condition of the almost 100-year-old Glen Innes Scout Hall is a real credit to the group.

“It reflects the pride and respect its members have for the organisation and its values.”

Scouting started in Glen Innes in 1908, just one year after the movement was founded in the United Kingdom by Lord Baden Powell.

“The basis of this project is to encourage those living with a disability to be active in the community and support their participation in Scouting if they wish,” Mr Higgins said.

“In Glen Innes we have about 30 youth and adult members. We feel by making the building more accessible more people will be encouraged to get involved.

“The hall also needs to cater for the other community groups which hire it, including Weight Watchers and the Highland dance troupe.

“Step-by-step we are future-proofing our hall and making it a versatile space for all to enjoy.”