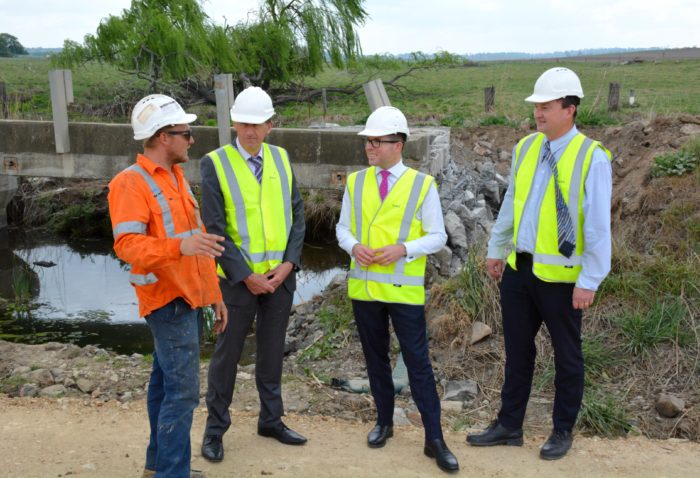 WORK is underway to replace the low, narrow and ageing Cam Creek Bridge, along Rangers Valley Road, north of Glen Innes, with a demolition crew taking down the existing troublesome single lane structure this week.

“This old bridge was an endless source of trouble for local residents and businesses, presenting a frustrating bottleneck for around 6,500 vehicle movements each year,” Mr Marshall said.

“The combination of the bridge’s placement on a corner, combined with regular heavy vehicles transporting cattle and feed to the Rangers Valley Feedlot, presented safety and convenience issues for traffic using Ranger’s Valley Road.”

The local MP said that with demolition expected to be completed in the next day or two, construction would begin on a new span without delay.

“This new bridge will be 7.2 metres wide, almost 70 per cent larger than the old span, which will make life easier for residents of Rangers Valley Road and the growing feedlot,” Mr Marshall said.

“Two lanes will allow vehicles to pass on the bridge while also allowing some room for error on foggy winter mornings.”

“The Rangers Valley Feedlot is currently the sixth largest feedlot in Australia and has approval to take on significantly more cattle,” Mr Marshall said.

“This upgrade will ensure that the road network can expand with local enterprise – allowing growth of the Glen Innes Severn economy without headaches for nearby residents.”

“That road is a key road to service the feedlot, and council has progressively been upgrading that road for some time,” Cr Toms said.

“The bridge was narrow and was one of the pinch points on the road. It’s great to have the assistance from the NSW Government, which supports the economic potential of the Rangers Valley Feedlot and locals on that road.”