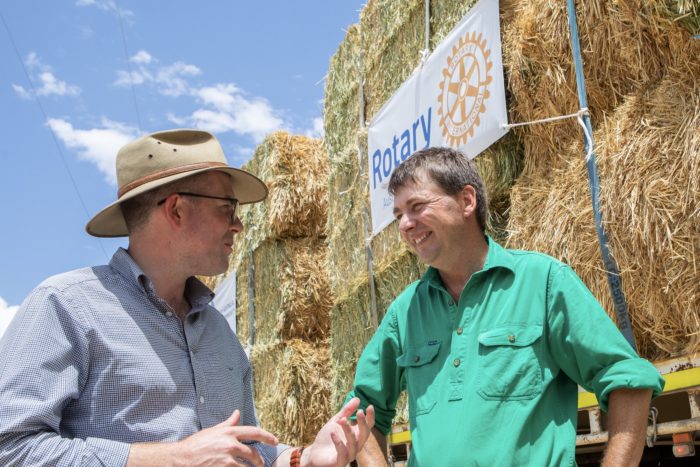 LONG overdue rain and a generous fodder delivery has brought a smile to the faces of landholders at Guyra and Wollomombi with farmers today welcoming the arrival of $1 million worth of hay, thanks to an anonymous donor and a $492,500 State Government transport subsidy.

Northern Tablelands MP and Minister for Agriculture Adam Marshall and Deputy Premier John Barilaro joined local Rotary Club members to welcome the first of many truckloads of fodder made available by the donation, as it rolled onto the property of Black Mountain farmer Matthew Friend.

Mr Marshall said the government’s contribution to cover all the transport costs has meant Rotary has been able to put the full $1 million towards buying hay.

“Today the result of that gesture has landed exactly where it’s needed and will go a long way to easing the pressure on farmers who are still in dire need of stock feed due to the prolonged dry.

“Rotary used strict guidelines to identify individual farmers living in areas of severe drought and has provided each one with enough hay to carry them over for a month.

“I’m pleased we’ve been able to do our part by contributing through the Donated Fodder Transport Scheme, meaning instead of almost half the $1 million donation being spent on transport costs, Rotary has been able to use the full amount to purchase hay for those in need.

“It’s turned what would have been a $1 million program into almost $1.5 million worth of support for farmers.”

Rotary Australia World Community Service Ltd (RAWCS) is managing the funds and the purchase and distribution of hay.

Mr Marshall said the subsidy was part of a broad range of support available to assist farmers and their families.

“Even though parts of our region have enjoyed considerable rain since late December there is still a long way to go before the drought is broken,” he said.

“As the Minister for Agriculture I am committed to supporting our primary producers while ever the drought continues and then forward into the rebuilding phase.

“Alongside the Donated Fodder Transport Scheme there are a number of assistance packages, available to help farmers during this time and I urge those who haven’t already to contact the Rural Assistance Authority to see what they may be able to access.”

The NSW Government has a range of grants, subsidies and support services available to assist drought affected primary producers.

For more information on the NSW Government’s $3.9 billion commitment to drought and water security, visit www.droughthub.nsw.gov.au