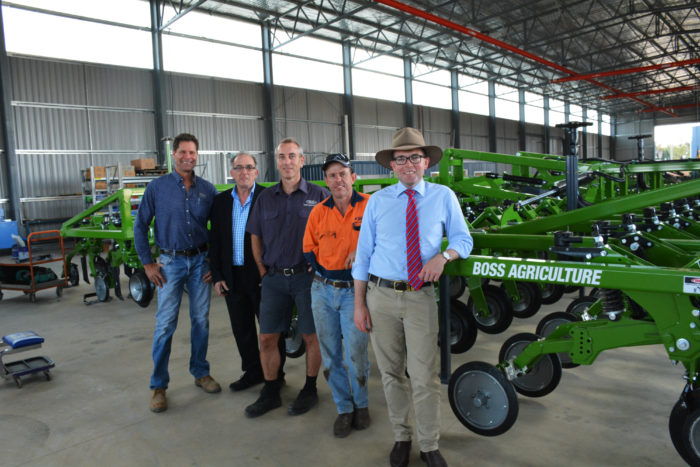 Mr Marshall inspected the booming agricultural implement manufacturer’s new sheds and 25,000 square metres of additional operations space this week, which were recently completed thanks to $495,000 in government funding support.

“Boss Engineering now employs around 110 people from the Inverell district,” Mr Marshall said. “With constant expansion and an ever increasing staff numbers, the manufacturing facility now looks more like a growing town than a regional business.

“The three massive and newly completed sheds have given Boss Engineering space to simplify their production chain, transferring the custom made machinery through a production line style process that increases productivity, which has resulted in the employment of 12 new full-time positions.”

Mr Marshall said the three new sheds serve as warehouse space, allowing the company to store more stock on hand, a staging facility for parts waiting to be welded and an assembly hall, which has boosted construction bay space by 25 per cent.

“In an age when Australia’s manufacturing industry appears to be in its twilight years, this expansion shows the continued value of supporting local industry,” he said.

“Boss’ reputation in the agricultural sector is continuing to grow, which is resulting in more sales and underpins expansions like this.

“These new jobs strengthen Inverell’s position as a regional employer, further diversify the town’s workforce and will bring hundreds of thousands of dollars into the local economy.”

“To continue to meet demand, Boss had to expand its footprint and staffing to be able to cater to a growing clientele,” Mr Hilton said.

“Our existing building and layout was no longer able to cater to our client’s demand. We’re the one good news story in manufacturing in Australia. Boss in Inverell is one of the businesses bucking the trend.”