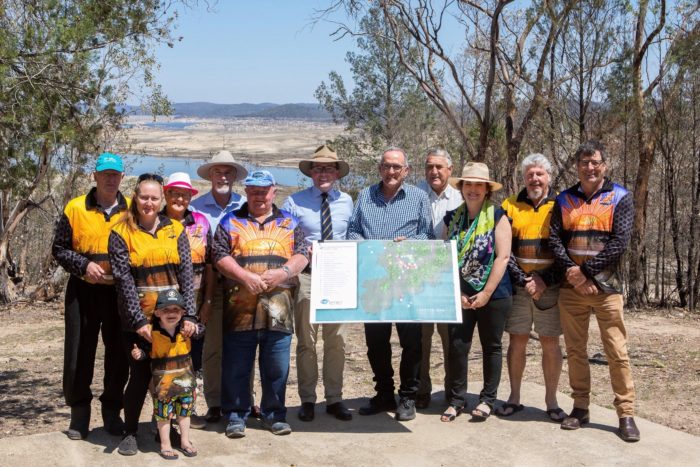 NORTHERN Tablelands MP Adam Marshall yesterday reeled in the largest-value catch ever seen at Copeton Dam since it was constructed, announcing a $5 million investment by the State Government, together with Inverell Shire Council, to fully redevelop the Northern Foreshore area.

Mr Marshall was joined by Inverell Shire Mayor Paul Harman and President of the Inverell RSM Fishing Club Peter Black on the banks of Copeton Dam to make the historic announcement.

Mr Marshall said the investment, totalling $5.7 million, would attract more people than ever to set up camp, throw in a line and enjoy the serenity of Copeton.

“This is a once in a lifetime opportunity to unlock the full potential of Copeton Dam and attract more tourists than ever before,” Mr Marshall said.

“The Northern Foreshore has long been the Copeton’s best kept secret, however, over the last four years it has seen an explosion in patronage with visitation up by almost 400 per cent.

“Copeton is famous for its open Murray Cod season and attracts thousands of people from right across Australia and from overseas to try their luck.

“Under the exciting plans, a new clubhouse will also be constructed to cater for groups and the existing boat ramps will be extended, as will the bitumen access roads to the, to ensure safe and easy access for boats into Copeton no matter the water level.

“I commend Council for the work it’s done to consult the community on what facilities to upgrade and put together a brilliant plan, which they’ll begin work on very soon.”

Mr Marshall added the upgrades would provide a significant boost to the local economy.

“This project is expected to inject a further $4 million into local businesses a year with the extra visitors the redevelopment will attract,” he said.

“It is a huge win for our entire area with towns like Bundarra, Bingara and Warialda also benefitting from the through traffic as tourists head to Copeton to try their luck in landing a giant Murray Cod.

“Our region is crying out for more holiday destinations which are close to home, affordable for families and accessible to people of all abilities.

“The Northern Foreshore Upgrade aims to do just that by widening the demographic of visitors who can access the iconic facility.”

Mayor Harman said the Northern Foreshore redevelopment would unlock millions of dollars for the community, which is struggling in drought.

“This really is an important day for not only the Inverell Shire but the many communities which neighbour Copeton Dam and rely on the tourist dollar,” Cr Harman said.

“Once complete this project is expected to inject a further $4 million into local businesses a year with the extra visitors who will come to the region.

“Currently the amenities struggle to keep up with the demand of the hundreds of families who flock to Copeton’s shores in the peak holiday season but through this upgrade council feels the infrastructure will be in place to cater for the community.

“With the incredible amount of hard work which has already gone into this proposal I anticipate Council will begin preliminary works before Christmas.”

“I want to thank Adam and Inverell Shire Council for the efforts they have make to make this project come about,” Mr Black said.

“Council has consulted the community on what facilities it wants to see on the banks of Copeton Dam and the fishing community can’t wait for the construction of a new clubhouse which will provide a quality venue for a number of groups in the community.

“Also during busy holiday periods peak hour traffic can develop around the existing boat ramp so I welcome the news the ramp will be extended with bitumen access roads to ensure safe and easy access for all boat users,” Mr Black said.

Mr Marshall added that the timing of the funding couldn’t have come at a better time.

“We all know how much this drought is hurting local communities and I’m thrilled that council has committed to using only local tradies and businesses to undertake all the work, meaning ever single cent of this $5.7 million project will stay in the local community – this is a huge shot in the arm for the local economy,” he said.

“With the dam level being so low at the moment, it provides the perfect chance to upgrade all the boat ramps without inference from water too.”