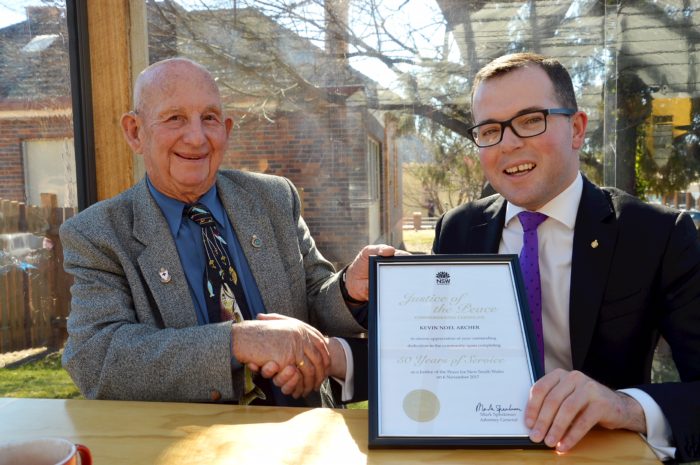 Northern Tablelands MP Adam Marshall presented Armidale Justice of the Peace Kevin Archer with a certificate recognising his 50 years of service to the people of NSW.

AT 83 years of age, retired sheep farmer Kevin Archer has just broken in his latest and perhaps his last horse.

“A real smart little thing,” Mr Archer said. “I’ve been riding about 20 kilometres a day down around the Dumaresq area. I kept getting the urge to break in just one more, but maybe now I’ll just stick to riding.”

The Boorolong local and former CSIRO employee was invited for coffee yesterday by Northern Tablelands MP Adam Marshall to receive a certificate from the Attorney General honouring his 50 years of service to the community as a Justice of the Peace of NSW.

“I didn’t intend to do it for 50 years – but the years have just flown by,” Mr Archer said.

“Initially there was no one around the Boorolong area (west of Black Mountain) that was a JP. A few people put me up for it as it was very handy to have one that was local.

“When I was a JP out in Boorolong I saw a bit of everything. These days now I’m in town I get a lot more people in a panic about not having a passport and needing to go overseas – at that point they tend to act like it’s a life or death situation!”

The retiree is anything but idle. Despite being in his 80s, Kevin is still an active member of the community, volunteering at the Presbyterian Churches in Guyra and Armidale, as well as visiting the elderly in nursing homes and at their residences.

Mr Marshall congratulated Kevin for his decades of service.

“I’m always in awe when I meet people in the community that have been volunteering for decades longer than I’ve been alive,” Mr Marshall said.

“Kevin’s tireless dedication is far more involved that being a Justice of the Peace for 50 years. He regularly volunteers at and visits residents in Homes for the Aged in both Armidale and Guyra and puts many of us younger generation to shame with his selflessness.

“After our coffee he was off to take care of an elderly lady in her own home so her son could have a break and attend to his business, secure in the knowledge his mother would be well taken care of by Kevin.

“Kevin’s record of community service is outstanding and his energy and vitality is one of a much younger man. I can only hope that at 83 I could even consider getting on a horse – let alone breaking one in!”

Kevin credits his long history of community service in part to necessity.

“When we were young there wasn’t much in the way of help or services. We all had to band together to get things done in our communities,” he said.

“Now I’m getting to the point where I’m helping people who are younger than me.”

Kevin also recently travelled to Singapore with his daughter to commemorate the service of his cousin John Skinner, who died in the Sandakan POW camp in 1945. Until recently, historians could not track down any family of the diggers, who was beheaded just hours before the end WWII in the Pacific.

“It was emotional but it was great to be able to travel to remember his service to our country,” Mr Archer said.