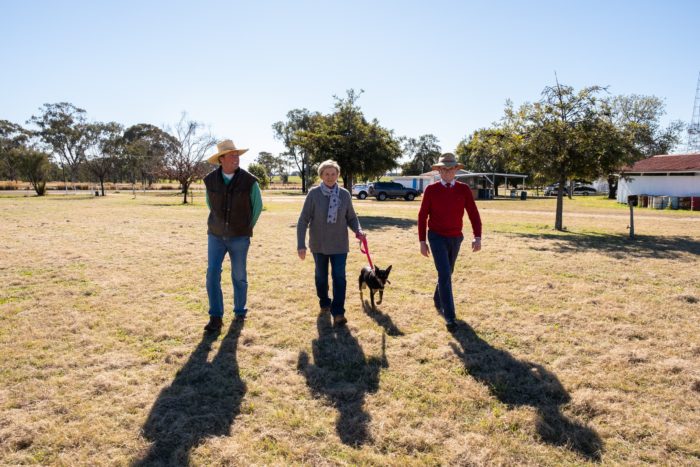 NORTHERN Tablelands MP Adam Marshall has teamed up with the Delungra Yard Dog Trials Committee to ‘muster-up’ support for this month’s NSW Championships, announcing a $5,000 State Government grant to assist with hosting the three-day event.

Mr Marshall said he was pleased to be able to throw the committee a bone and support the event which will injected thousands of dollars into the local economy.

“Delungra’s reputation for yard dog trialling is unrivalled, with the town’s last event in 2017 attracting the largest number of entries in NSW for that year,” Mr Marshall said.

“Unfortunately the event has been tied up since then with the drought, reduced local sheep numbers and COVID-19 causing consecutive cancellations.

“With the return of positive seasonal conditions the dogs are again being let out, with huge entries expected for competition between the 20th and 22nd of August.

“This funding will pick up the financial shortfall from lost entries over the last three years, assisting with the event’s administration and operating costs.

“With the huge amount of rain recently, money will also be spent gravelling the yards to make them safe and presentable for competition.

“Much like an agricultural show, the economic flow on from the yard dog trials is massive. It provides income for community organisations, local hospitality businesses and livestock carriers, while offering the community a great social gathering.”

Delungra Trials Committee President Matthew Ehsman said the organisation’s event was held in the highest regard by the NSW Yard Dog Association.

“After three years without local a competition we are excited to again get out in the paddock and celebrate the incredible skill of yard dog trialling,” Mr Ehsman said.

“This grant will give us financial breathing room and the funds necessary to run a top class event.

“The return of the trials this year is an opportunity for Delungra to reinstate itself as a leader in this field.

“If we are able to run a successful event, as was the case in 2017, that goodwill with competitors will set a solid foundation for future trails and hopefully put us in the running to again host the NSW Championships.

“We are extremely grateful to receive this grant from Adam and the State Government, and thank him for his support of the region and farming sector.”