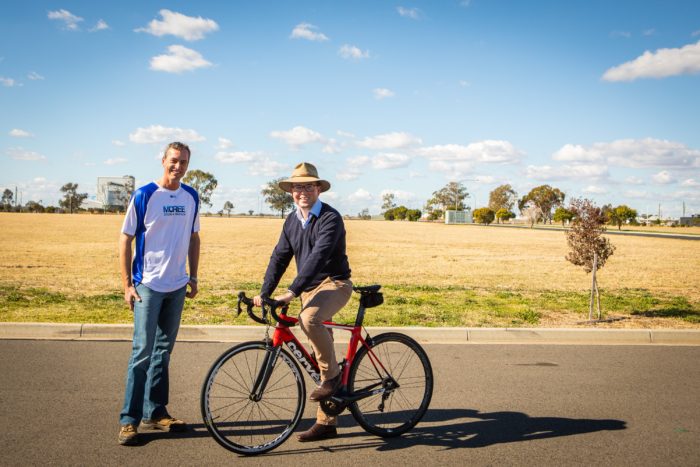 MEMBERS of Moree Services Cycling & Triathlon Club will stand out next time they cross the finish line with Northern Tablelands MP Adam Marshall today announcing a $5,000 State Government grant for new uniforms and signage to promote the organisation.

Mr Marshall said the club resumed local competitive events last year after a lengthy hiatus and was now ready to make its mark on the region’s cycling circuit.

“For competitive cyclists looking to push themselves, what better place to pin your ears back than on the flat roads of the Moree Plains,” Mr Marshall said.

“Since the resumption of regular cycle events, the club has based itself on a quiet ring road off Sandalwood Street, near Moree Regional Airport.

“This is a public road which means, as a safety measure on race days, the club has to borrow road signs to alert traffic.

“This grant will purchase the club’s own signage, which it will store in its trailer to be put up whenever needed.

“Funds will also subsidise the annual fees associated with competition, including the cost of national and state memberships which are needed for insurance.

“I congratulate the Moree Cycling & Triathlon Club for what it’s achieved in bringing racing back to the west and look forward to its ongoing success,” Mr Marshall said.

“Our club has about 40 members, and many of those are up and coming juniors who have bright careers ahead of them on the racing circuit,” Mr MacCue said.

“With new uniforms everyone will know our riders as they fly across the finish line which will be great promotion for our club.

“Anyone who has competed in cycling knows it can be expensive and this funding will go a long way to reduce the financial burden on our members, helping them stay in the saddle.

“I think cycling in Moree has a strong future and hopefully one which sees us pedal off the town’s public roads and onto our own designated criterion track.”