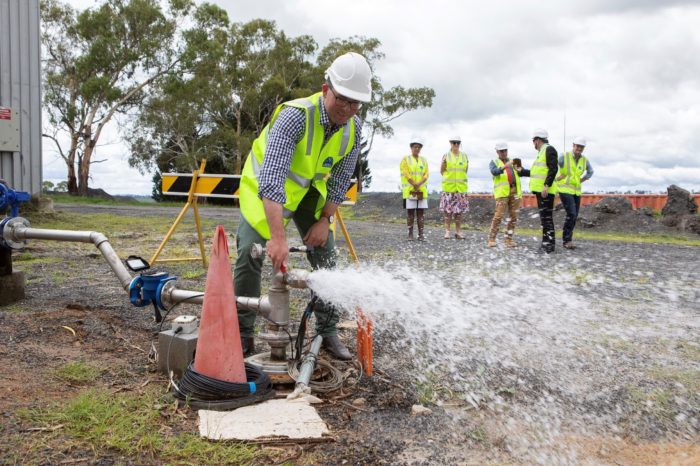 Mr Marshall said council had been working with Water NSW for months to try and establish a back-up groundwater supply which could be used should the town supply run dry during the drought.

“Not in living memory has the township of Glen Innes experienced such a dire water situation as seen during 2019,” Mr Marshall said.

“Through the efforts of council bore drilling around Glen Innes has yielded positive results with a hole at the Eerindii Ponds providing up to six litres of potable water per second.

“This water can be immediately pumped into the quarry storage nearby before being sent through the water treatment plant and into the town system for potable use.”

The project builds on the early work already completed by council and will increase the water supply options available to the community of Glen Innes and their resilience to drought events in the future.

Mr Marshall said despite recent rain the bore was currently in use as a substitute water supply for the town.

“While we all welcome the more than 200 millimetres of rain which has fallen in the Glen Innes area since the start of January, unfortunately the subsequent run off has resulted in manganese contamination of the Beardy Waters supply,” he said.

“Recent run-off into the Beardy Weir and a large amount of vegetation in the water has caused manganese to develop, making it unsuitable for consumption.

“Council is letting the weir flush out naturally and luckily has been able to mitigate the impact of contamination on the community by switching on this new bore.

“I congratulate council on getting bore down and operational, improving long-term water security in the region.”

This funding forms part of the Government’s $88 million package to extend water supplies across regional NSW and a total drought package of $3.3 billion since 2017.