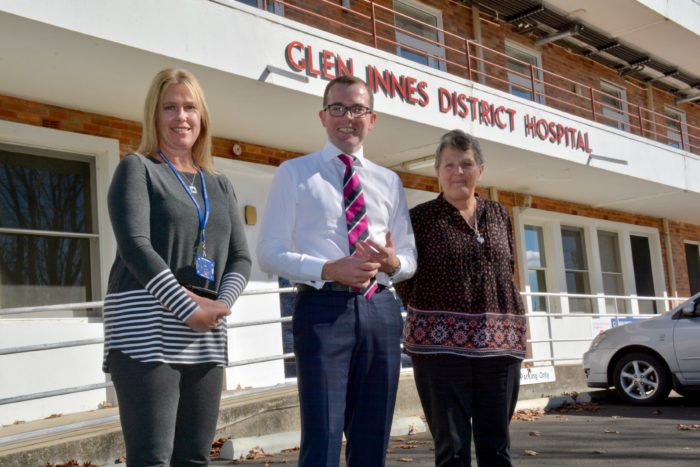 TWO important upgrade projects at Glen Innes District Hospital, worth more than $500,000, are well underway and on track to be completed in the next month, according to Northern Tablelands MP Adam Marshall.

Mr Marshall inspected the improvement works yesterday, which he said would improve the safety and comfort of patients and staff at the hospital.

Last year $500,000 was secured from Hunter New England Health (HNEH) to upgrade areas of the hospital after it was agreed that money raised by the Hospital Auxiliary for the construction of a helipad would be expended on hospital improvements.

Mr Marshall said that after consultation with hospital staff, the Auxiliary and community donors, it was agreed to proceed with two major projects within the hospital – the installation of piped gases to the general ward and upgrading to reverse cycle air-conditioning throughout the hospital.

“The new medical gas supply system will provide the hospital with a safe, modern and economical delivery of medical gases to the point of use at beds in the ward and eliminate the need for staff to push trolleys of glass around the hospital for patients,” Mr Marshall said.

“This is a necessary project to bring Glen Innes Hospital in line with other facilities in our region and make life much easier for hospital staff and much more comfortable for patients.”

Mr Marshall was joined yesterday by hospital manager Cathryn (Topsy) Jones who said the local staff were really looking forward to the upgrades being completed.

“The air-conditioning will make an enormous difference to the comfort levels of patients and staff, especially in the depths of our Glen Innes winters,” Ms Jones said.

“It’s not uncommon either to have some severe heat in January, like this year, and the air conditioning will be a huge relief to everyone inside the hospital.

“We’ve also replaced all the doors on the first floor and will improve the balcony so patients can also have easier access from their rooms.”

Mr Marshall said the work, being undertaken by local contractors, was progressing well and would be completed within the next month.

“This upgrade project will make a huge difference to the operation of the hospital and I think the community will really notice the difference it will make,” Mr Marshall said.