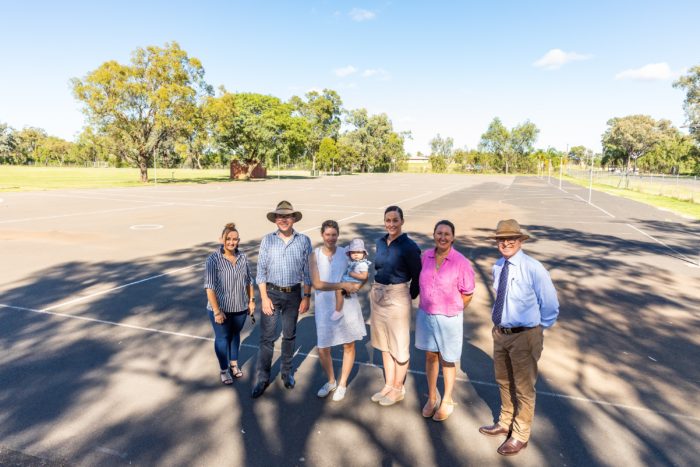 A NEW clubhouse with modern amenities will be included in a planned redevelopment of Moree’s netball courts and facilities, with Northern Tablelands MP Adam Marshall joining Moree Plains Shire Mayor Mark Johnson last Friday to announce a $504,187 State Government grant for the project.

Council received a $680,000 Federal Government grant to renew the netball courts last year. This funding will allow the on-court and off-court facilities to be transformed into a first-class netball complex.

“With their proximity to Greenbah Creek, Moree’s six netball courts are no strangers to water inundation,” Mr Marshall said.

“Over a number of years the Netball Association has been working with council on a plan to redevelop its facilities, with a focus on creating a modern netball precinct to grow the sport and reduce its flood risk.

“This State Government funding will deliver a secure clubhouse, equipped with accessible female and male change rooms and amenities.

“It will provide players with a safe place to get changed and store their belongings during play and offer the association somewhere to keep its equipment away from damaging floodwaters.

“With so much development happening in Moree, linked to the Special Activation Precinct and Inland Rail, the town is experiencing an influx of new residents.

“Investing in sport and community facilities now will further enhance Moree’s ability to entice new community members and encourage them to stay permanently.”

Moree Plains Shire Mayor Mark Johnson said it was his hope in 12 months’ time Moree would boast one of the highest quality netball facilities in the North West.

“This is a really exciting time for women’s sport in Moree, with council now having $1.2 million to upgrade and build new netball facilities for the community,” Cr Johnson said.

“The upgrade’s design phase has just been completed and a contractor will be chosen shortly. We are all excited and can’t wait for work to begin.”

Moree and District Netball Association President Amber Brown said the redevelopment realised the club’s dream of having a professional netball precinct which promoted the game, locally and beyond.

“Prior to the COVID-19 pandemic, Moree netball consistently had 350 registered members on its books,” Mrs Brown said.

“We have long believed there has been scope to grow our competitions and player base, however this has been restricted due to the quality of our aging courts and limited amenities.

“The greater redevelopment will enable us to expand existing local schedules, including our mixed competition, and increase our ability to host larger, Netball NSW-sanctioned, representative carnivals and training events.

“Ideally we would like to expand our competition schedule to include twilight competitions and training, providing flexibility for women who may want to play but have other commitments on the weekends.

“With this grant secured, we look forward to working with council to get the new clubhouse built and open by 2023.”