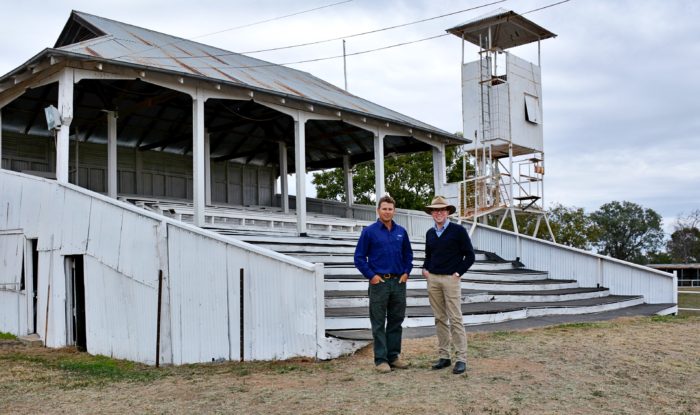 FUNDING from the NSW Government has been secured to revive the iconic century-old Garah Racecourse grandstand, winning the race against encroaching water and chronic structural damage by a nose.

Member for Northern Tablelands Adam Marshall today announced $52,590 in to rebuild the old grandstand, saying time was critical to securing its utility for another 100 years.

The MP inspected the grandstand last month and immediately began lobbying for the funds.

“Towering over the Garah Racecourse, the grandstand is essential seating for the Talmoi Amateur Picnic Race Club, providing bar facilities and jockey’s rooms underneath and is an icon of the picnic racing circuit,” Mr Marshall said.

“Close to 2,000 frocked and suited up race fans flock to the Talmoi Races each June and this century-old grandstand helps hundreds put their heels up in comfort.

“This funding will keep that tradition going for decades to come, putting an end to water damage to the foundations, that has threatened to close this grand old dame of the track.”

Mr Marshall said the racing club had implemented patchwork repairs for years, each time buying the impressive structure another few years of life – but bandaid fixes had now been exhausted.

“This major overhaul will tear down the front of the grandstand, replace parts of the structure with water damage and improve drainage so the structural rot won’t rear its ugly head again,” he said.

“This restart also provides a unique chance to improve services for officials and the community. Showers for jockeys will be added and the old long-drop toilet removed.”

Talmoi Amateur Picnic Race Club President Justin Ramsay said the upgrades would open up the club to the entire community.

“With better facilities, we can get groups like the school to hold fundraisers in at the grandstand,” Mr Ramsay said.

“We might see weddings too – it’s a beautiful old building.”

Mr Ramsay said all the work would be completed before the next race meeting in June next year.

“We first lined up all the builders back in April – we realised we needed to do something, but weren’t sure where we’d find the money,” he said.

“Now that Adam has given us the good news, we can get on with the work and construction will hopefully be started within the next 2-3 weeks.”