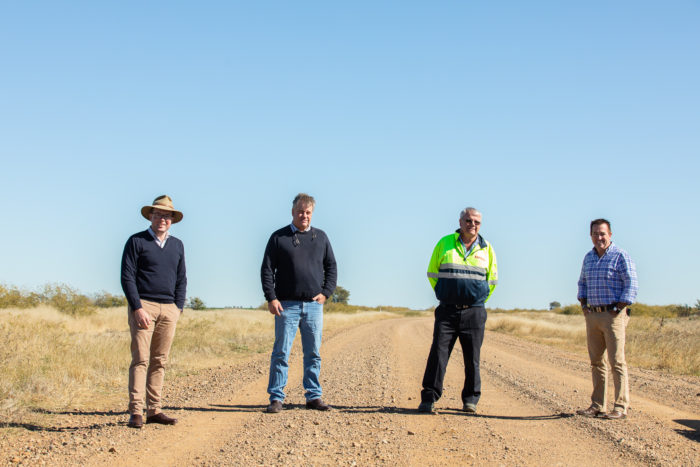 EFFORTS are underway to improve the safety of an important feeder road which will channel future traffic past the Moree Special Activation Precinct (SAP), with Northern Tablelands MP Adam Marshall announcing $560,588 to seal and realign dangerous curves on Burrington Road.

Mr Marshall said the project would see improvements made to two curves, which are well known for bringing unsuspecting drivers undone.

“The tight bends, rutting and corrugations of the gravel surface have been known to force inexperienced drivers off the road through loss of traction and control, sparking a myriad of complaints to Moree Plains Shire Council.

“The decline in road quality has been exacerbated by a significant increase in traffic since the drought, with families in the area working off farm and a large number of backpackers travelling to employment.

“In future, Burrington Road is also likely to see more heavy-vehicle traffic, as croppers look to access services at the freight hub and SAP.

“Meeting an oncoming truck on those curves would be a horrifying experience for even the most experienced driver, and so this project is really about addressing this problem before someone is seriously injured or loses their life.”

Council staff have started planning the scope of works and expects the project will be complete by March next year.

Federal Member for Parkes Mark Coulton said the improvements would be welcomed by people in the Moree Plains Shire who use the road every day.

“Not only will these projects improve safety outcomes for locals and visitors – they will drive valuable jobs in the region over the next 12 months as Moree Plains Shire Council gets cracking on works,” Mr Coulton said.

“I’m pleased the Australian Government has been able to partner with the NSW Government on this initiative and others, as part of our economic stimulus efforts.

“This is about delivering small improvements that will make a huge difference.”

The injection will see $382 million of joint funding allocated to shovel-ready projects able to start in the next 12 months, driving an estimated 3,500 jobs in rural and regional NSW.