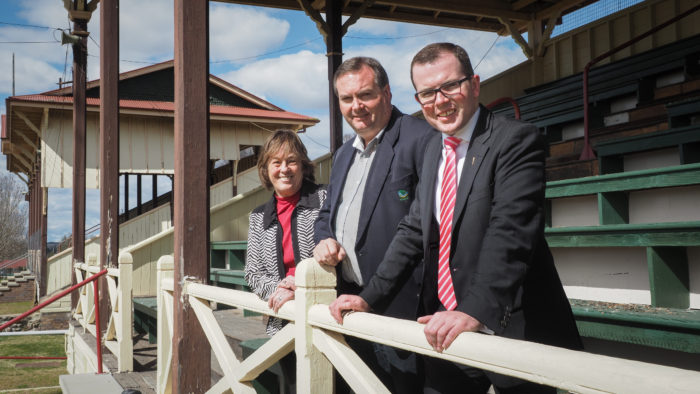 FRESH advances in the rehabilitation of Armidale’s handsome but run-down heritage showground can proceed after the Armidale Showground Trust secured $57,282 from the NSW Government’s Public Reserves Management Fund Program to do urgent improvements.

Member for Northern Tablelands Adam Marshall announced that the Trust would invest $54,282 from the program to upgrade the showground entrance road and $3,000 in rewiring the Elliott Pavilion.

“The Trust’s job is unenviable, in that Armidale’s showground has been badly run down,” Mr Marshall said.

“But it also completely worthwhile, because the showground buildings are of a class and quality we won’t see again. Future generations will be grateful for the work the Trust is putting in to ensure this heritage is not abandoned to the point of collapse.”

Armidale Showground Reserve Trust Administrator Rodney O’Brien said he was “ecstatic” that the Public Reserves Management Fund Program had decided to invest in the facility.

“Upgrading the entrance road had become important because one of the Trust’s strategies for generating income has been to open a caravan park on the grounds,” he said.

“The same works will help improve drainage on the site. Poor drainage undermined the foundations of one of the showground’s heritage-listed stands, and forced its closure for the foreseeable future.”

But Mr O’Brien believes that in the past 12 months, the fortunes of the showground have begun to turn.

“As we start to generate funds from the caravan park and other activities, and with government support like this coming in, we’re definitely making a difference,” he said.

Mr Marshall said that this year more than $550,000 was secured for public reserves across the Northern Tablelands.