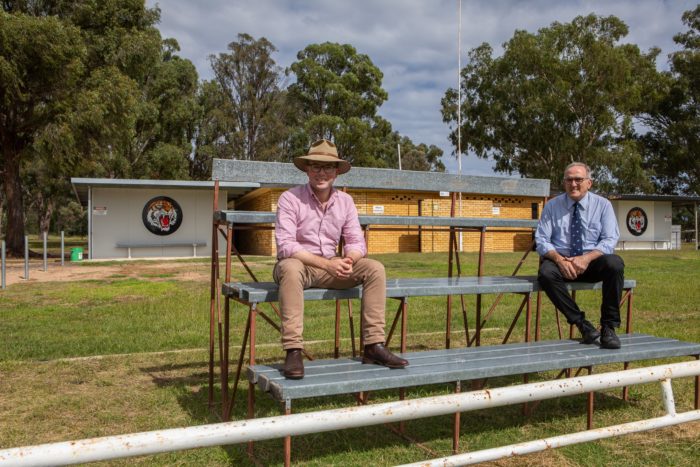 Northern Tablelands MP Adam Marshall, left, and Inverell Shire Deputy Mayor Anthony Michael on the old grandstands which are about to be replaced at the Tingha Recreation Reserve.

Mr Marshall said the project would create an exciting spectator experience, for some of the region’s most die-hard rugby league fans.

“In Tingha rugby league is like a religion, which is followed devoutly every weekend by the vast majority of the local community,” Mr Marshall said.

“From the first whistle of the 2021 season, supporters will be able to watch matches from one of the two new steel grandstands. With tiered seating and a permanent roof, these structures will offer footy fans a bird’s-eye-view of games as well as protection from the sun and rain.

“A nice element of this project is new waste bin enclosures which will also be installed around the ground. Council will approach young people in the Tingha community, aged between 12 to 24 years, to design artworks that will be painted onto these bins, giving local youth a sense of ownership of the venue.

“With more than a third of Tingha’s population young people, the project is set to improve the liveability of the town, for a large number of youth,” Mr Marshall said.

Inverell Shire Deputy Mayor Anthony Michael said the funds would improve one of the Tingha community’s most well utilised and best loved facilities.

“Whether it’s a Saturday game of rugby league or an outdoor movie night for the kids, throughout the year the Tingha Sport and Recreation Reserve is an important gathering place for the local community,” Cr Michael said.

“It’s hoped this project will make the grounds more inviting to the community, which will result in more people accessing these cultural and health initiatives.”